I know you’ve all been waiting on pins and needles (#sarcasm) waiting for this recipe after I talked about it last Friday. And also for my daily post, can’t skip a day! So here’s the deal. I love this recipe. Like love, love, love it. And I thought Brandon did too. And then I made it the other night and he only ate like half a plate. And I was like um excuse me, I cooked, why aren’t you eating? Apparently he does like the recipe, but thinks it might be a little too rich and can’t eat a lot of it at once. Whereas I can eat like three portions in one sitting. So consider that your warning. :) 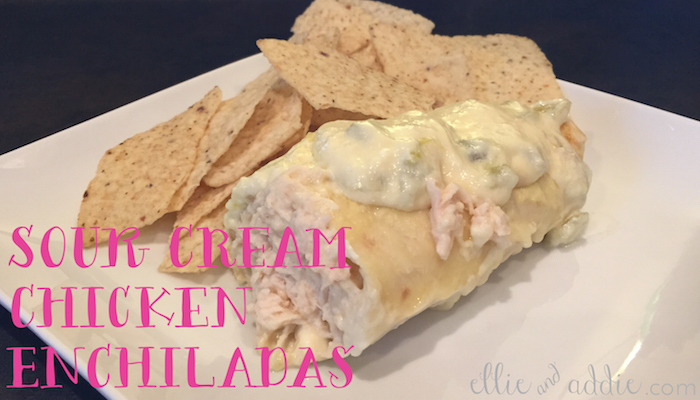 I can’t take credit for this recipe either. A lovely friend from my Junior Service Club delivered this meal to us right after I had Jude last year and I’m pretty sure I hadn’t even finished chewing my first bite when I emailed her asking for the recipe!

Ingredients:
Shredded chicken breasts
Tortillas – I use the large and there are 8 in a package
2 cans cream of chicken
16 ounces sour cream
1 small can of chopped green chiles
2 bags of monterey jack cheese
Can of chicken broth

You can cook your chicken however you want, I usually just put some frozen breasts into the oven and bake. To make this recipe even easier, you could probably get rotisserie chicken as well! I usually bake three chicken breasts, depending on how big they are.

I think the best way to shred chicken is to chop it into large pieces and then throw it in your big mixer with the paddle attachment. I’ve seen people talk about it and pins all over Pinterest, and it really is the easiest way ever to shred chicken! 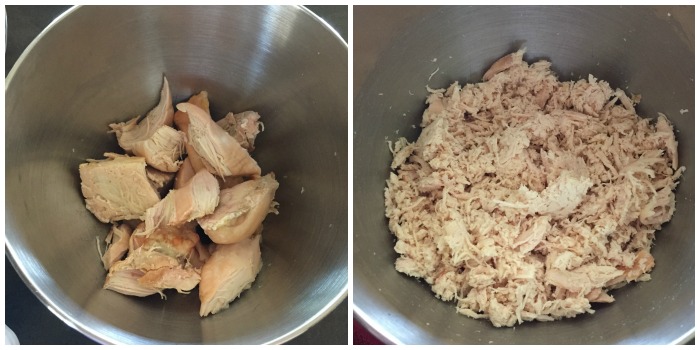 In a separate bowl combine both cans of cream of chicken, the tub of sour cream, and your green chiles (I don’t drain them). Mix it all up really good. To thin it out, I add some chicken broth. I usually buy a can of chicken broth at Aldis because I know I won’t use an entire carton. 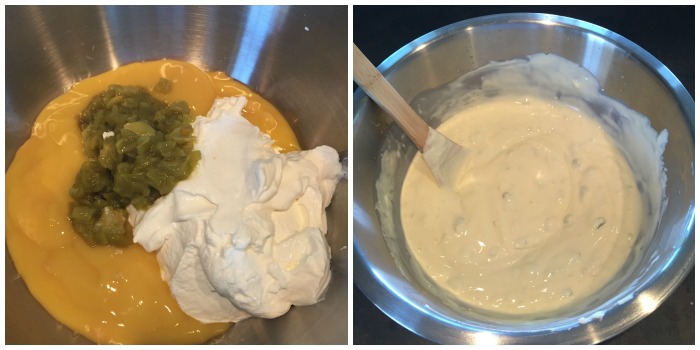 Add a bit of the sour cream mix to your shredded chicken to moisten it, I also add an extra bit of broth here as well. Mix it all up. 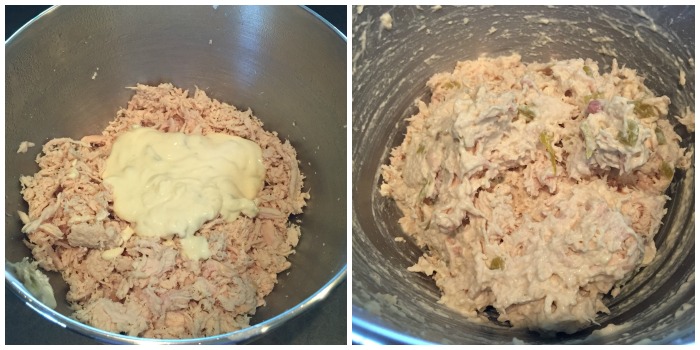 I would spray the bottom of your pan (I use a glass casserole dish) with cooking spray and then spread a little bit of the sour cream mix on the bottom of it to coat. 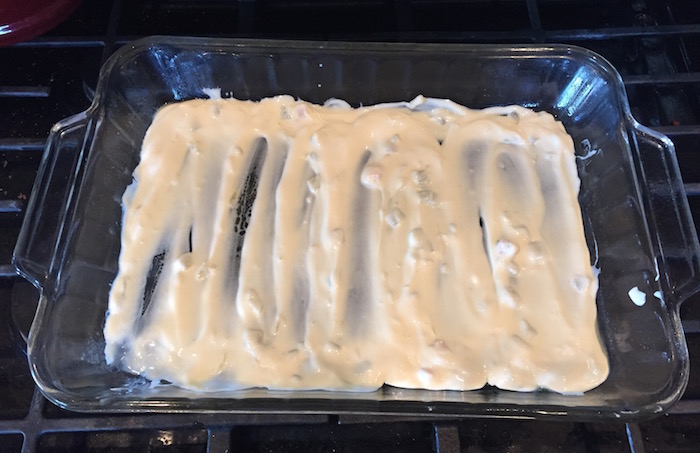 Here’s where you might think I’m a little crazy. Since I don’t measure my chicken ahead of time very well, I never know how much to put in each tortilla. And I don’t like to think that I’ll have lots of extra chicken left over or not fill the first tortillas enough. So I clean my counter and lay out each tortilla and then start scooping chicken onto all of them. Yes I know, I’m weird, but it works for me! :) 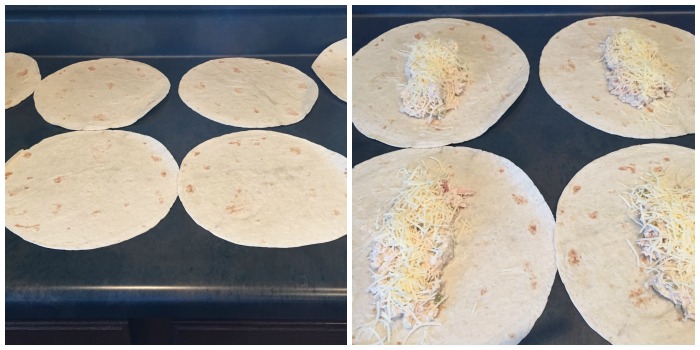 After filling all the tortillas with the chicken mixture, throw on some cheese and wrap them up. The first time I did this I had to search YouTube on how to properly roll a tortilla, again I know I’m weird.

Fill up your dish with all the wrapped tortillas and then cover all the tortillas with the rest of the sour cream mix. Make sure to get the sauce in between all of the tortillas. Then top that with more cheese and cover with foil. 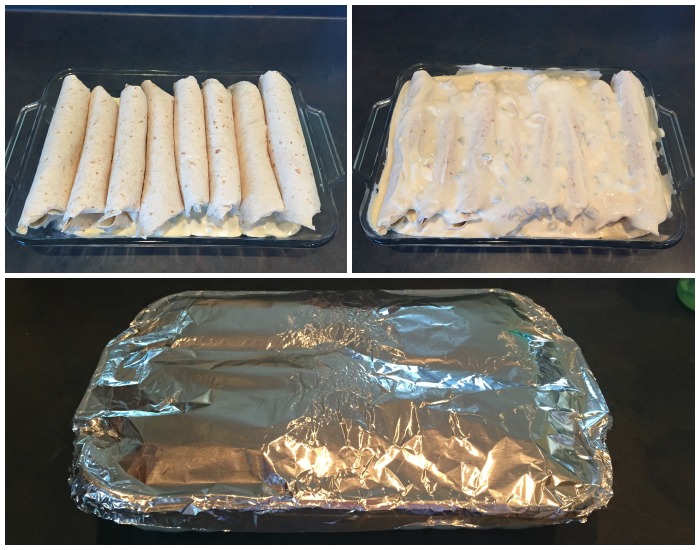 Put in the oven at 350 degrees for about 30 minutes, then take the foil off and bake for an additional 10 minutes, till the cheese is nice and bubbly. 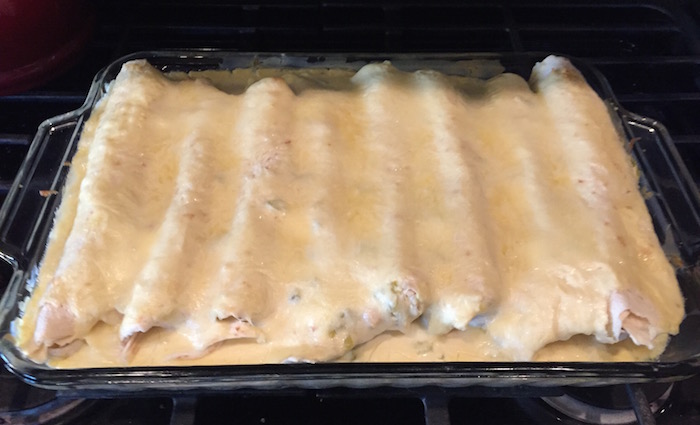 We like to serve this dish with tortillas chips, and we usually have leftovers for days. Which makes me happy and BTR, well he could care less. :) 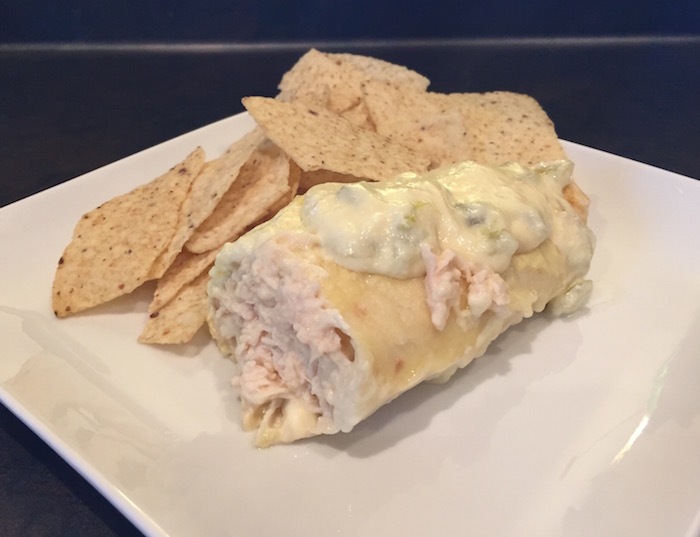 You can search Pinterest for lots of variations of sour cream chicken enchilada recipes, but I think the recipe my friend gave me is the easiest to make. She also suggested sautéing green, red, and yellow peppers or even mushrooms and adding to the chicken mix. I think that would be delicious, but I’m usually going for quick and easy.

The other great thing about this recipe is, I will make it early in the day and then put it in the fridge to bake at dinner time. And it’s great to make as a meal to take friends, all they have to do is heat! And again, don’t forget the tortilla chips! 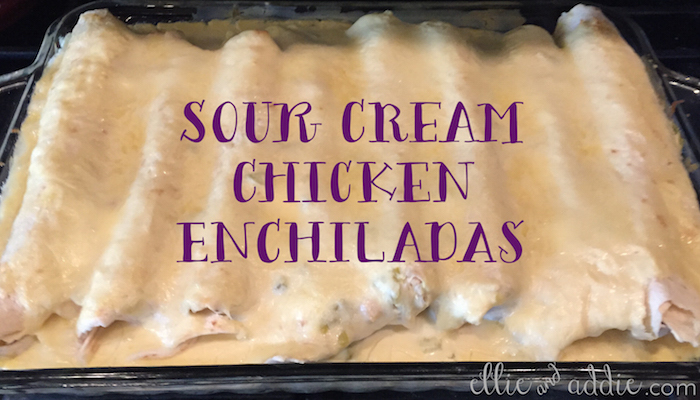 Hope you enjoyed this recipe, it really is one of my favorite meals!