Who is excited for Opening Day of baseball today?? 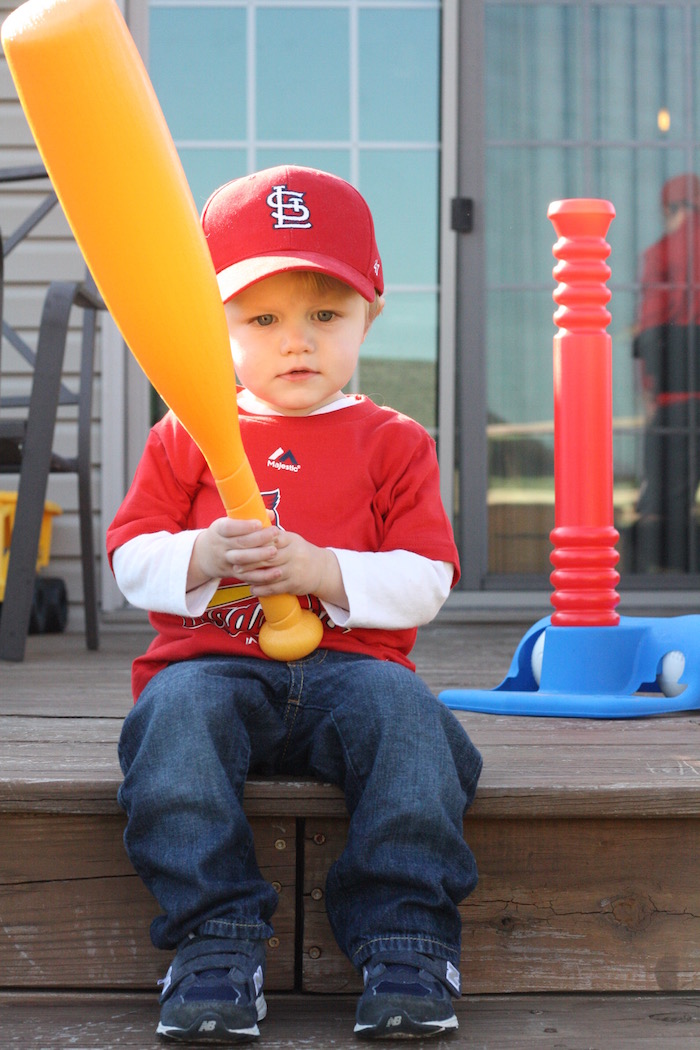 Okay well the Cardinals actually played yesterday, but we are still pretty darn excited around here for baseball season to begin! I shared a few opening day photos from years past in a post last year (read it here), but this year we got Jude all dressed up and headed outside to play with his t-ball set to celebrate the beginning of baseball season! 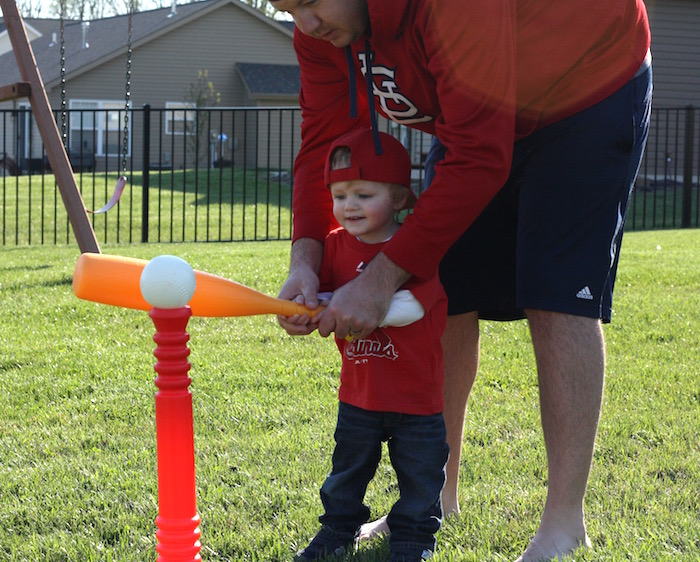 Jude thinks hitting the ball off the T is pretty much the coolest thing ever. He also thinks his baseball hat that is just like papa’s is the best thing ever. So basically his life is made! 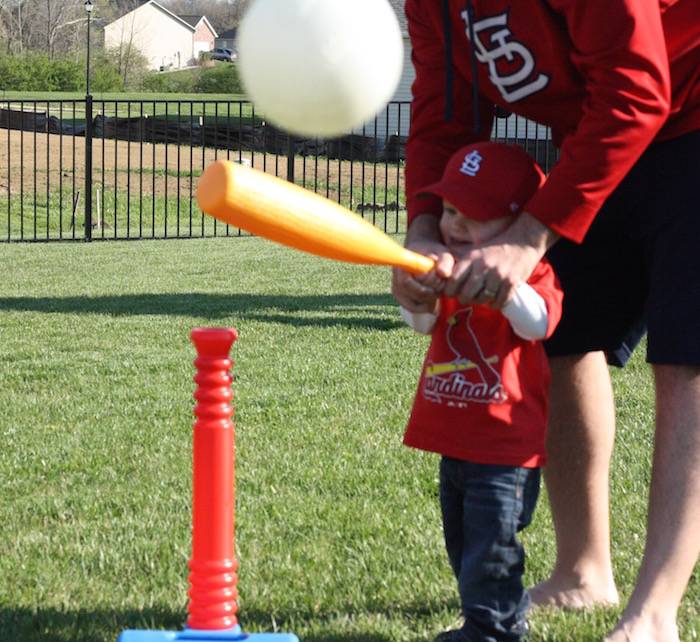 Someday I will learn not to stand in the way of the ball! Someday soon hopefully. 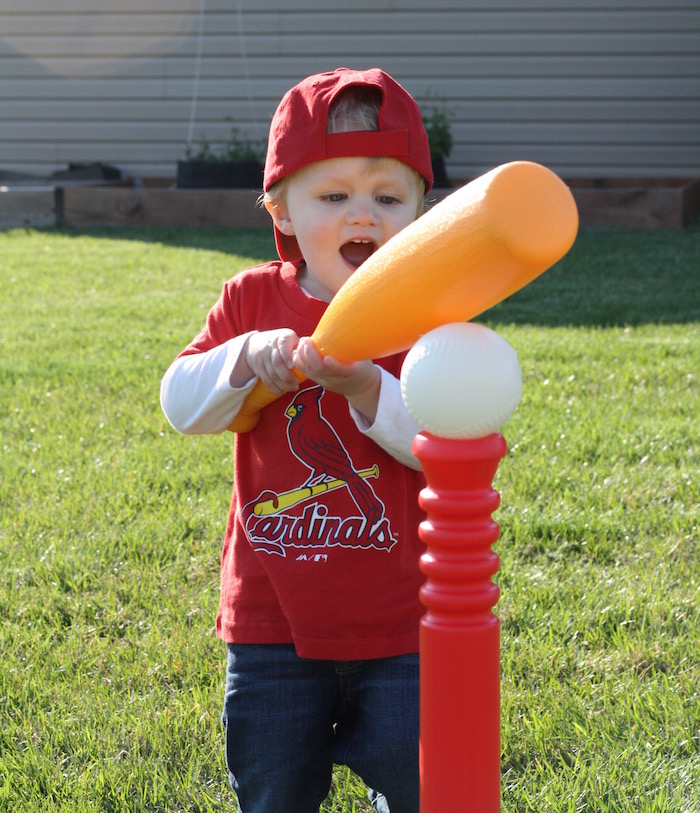 We’re working on his form, but he’s getting better at making contact! 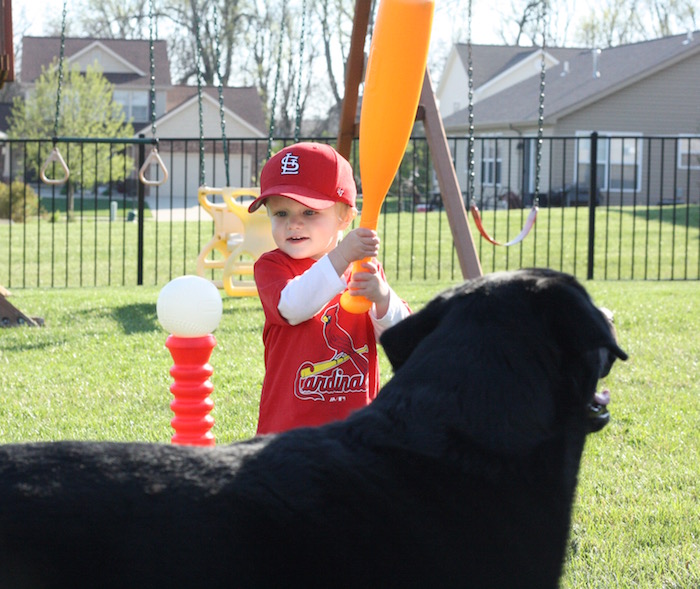 Addie cannot leave him alone when he is playing, she just wants to eat the balls though! Seriously though, I’m just as obsessed with him wearing a baseball hat as he is. It’s just soooo adorable! 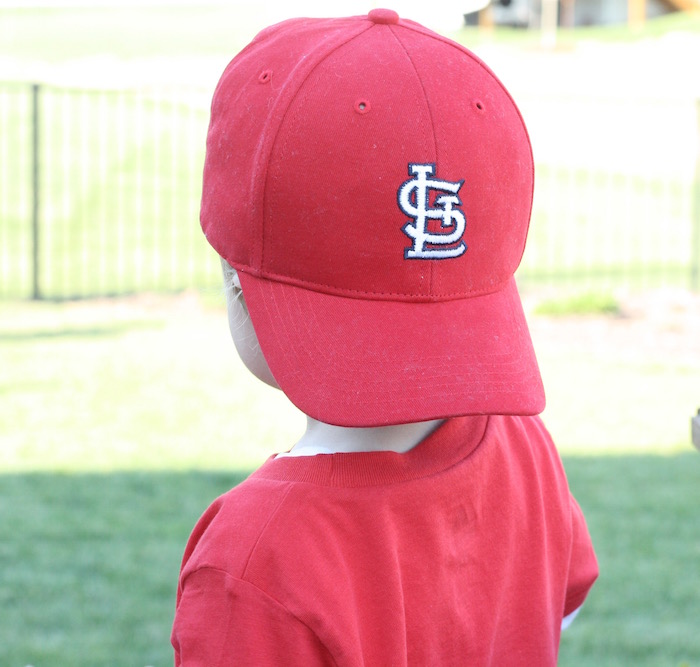 And since we were outside I put some fertilizer in the garden and watered. Jude had fun helping me water. 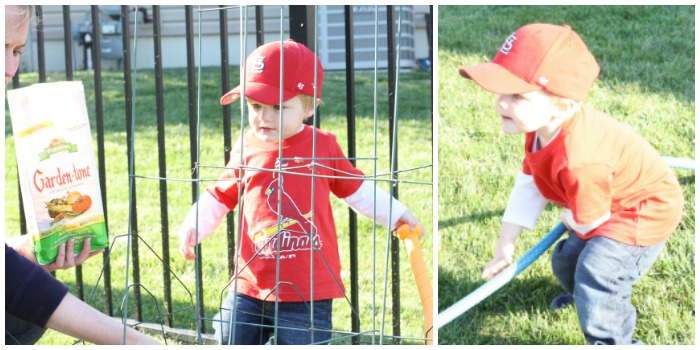 After working in the garden we played on the swingset for a bit. 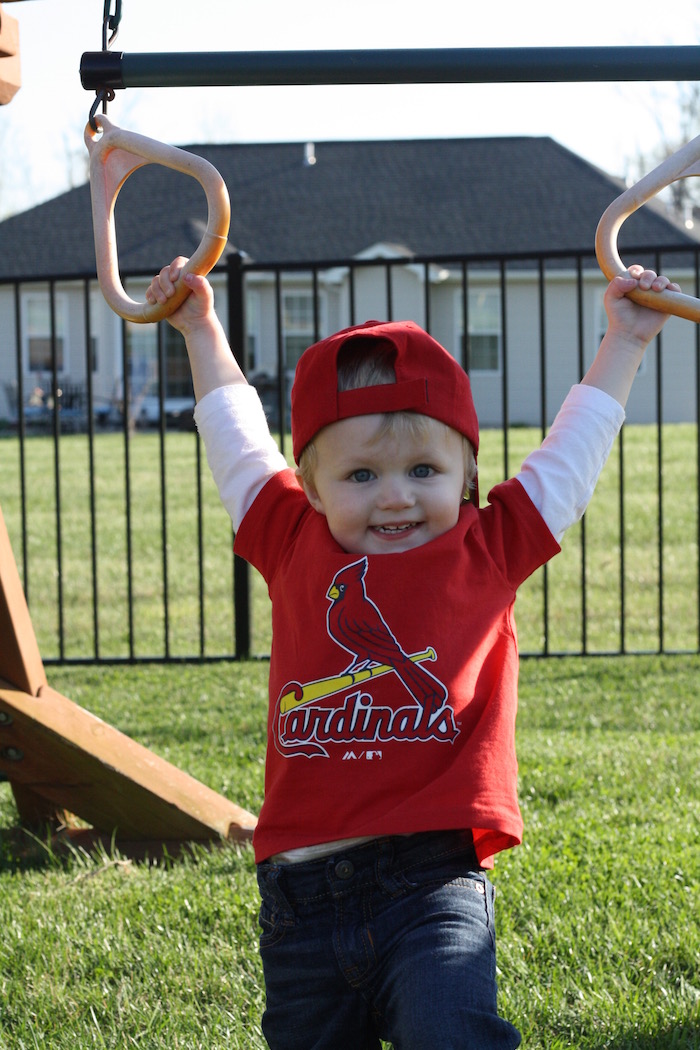 And also gave Addie hugs. Jude is so obsessed with our dogs lately and I love it! Luckily they love him just as much as he loves them and they are so sweet to him. 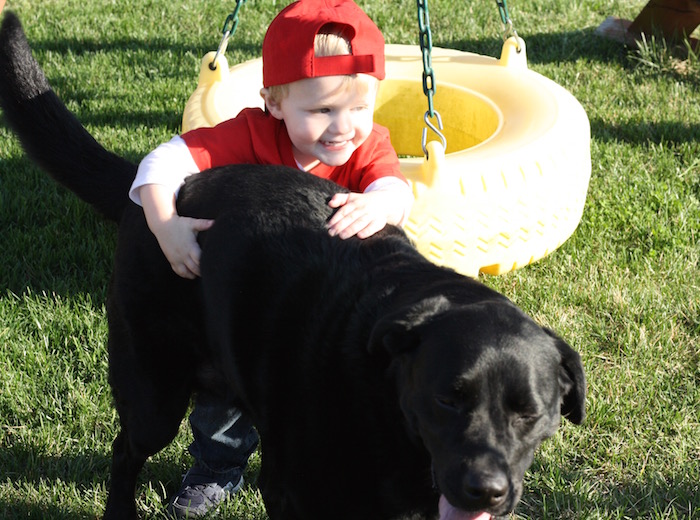 And this next one might be my new favorite pictures EVER. BTR grabbed the camera and snapped it and I’m just obsessed with it. 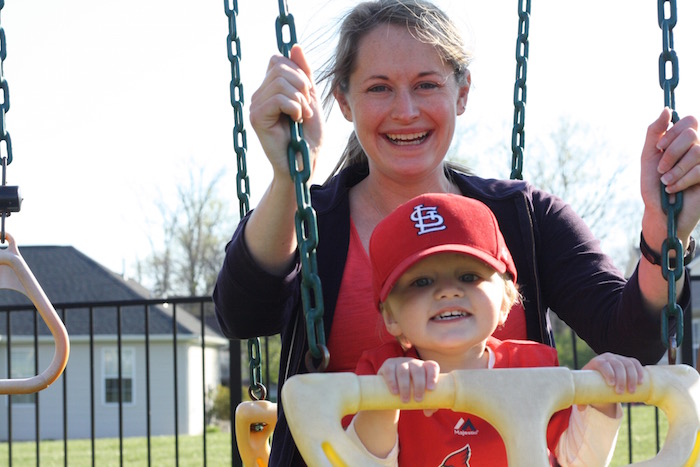 And how about a throwback picture? 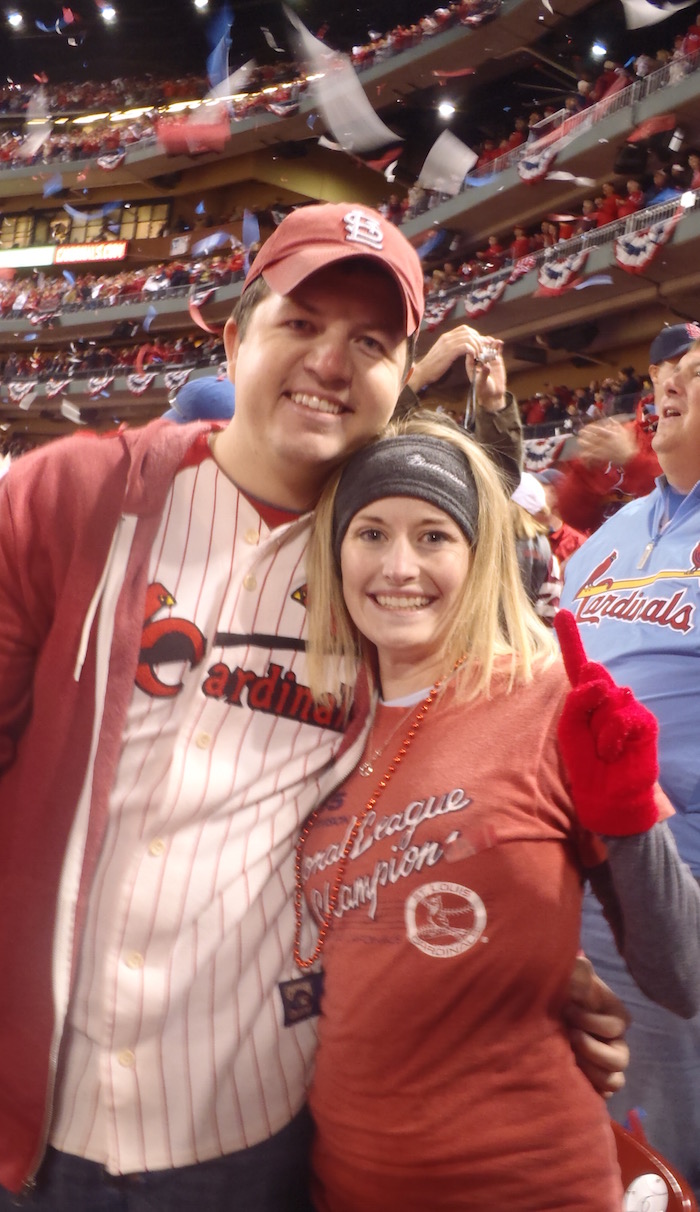 This picture is from the end of Game 7 of the 2011 World Series when the Cardinals beat the Texas Rangers. That was the most fun playoff season ever and I will never forget it! And fun fact, the shirt I’m wearing is actually Brandon’s mom’s shirt from the 1985 post season! We lost to Kansas City in the World Series that year, but I love it because it’s the year Brandon and I were both born. And I love that I have two shirts from 1985, one from my mom and one from Brandon’s mom! I need to collect some shirts that say 2014 and 2016 to give to Jude and the baby! 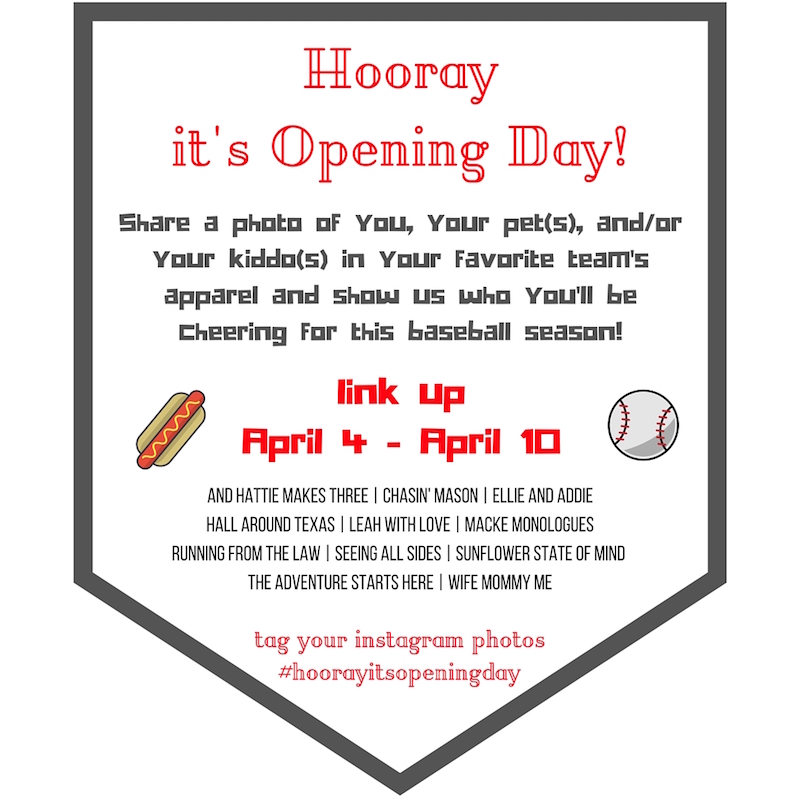