A little late, but here’s our Halloween 2016 recap! We had the best weekend, starting with Friday night when we played on the pumpkins at Eckert’s. 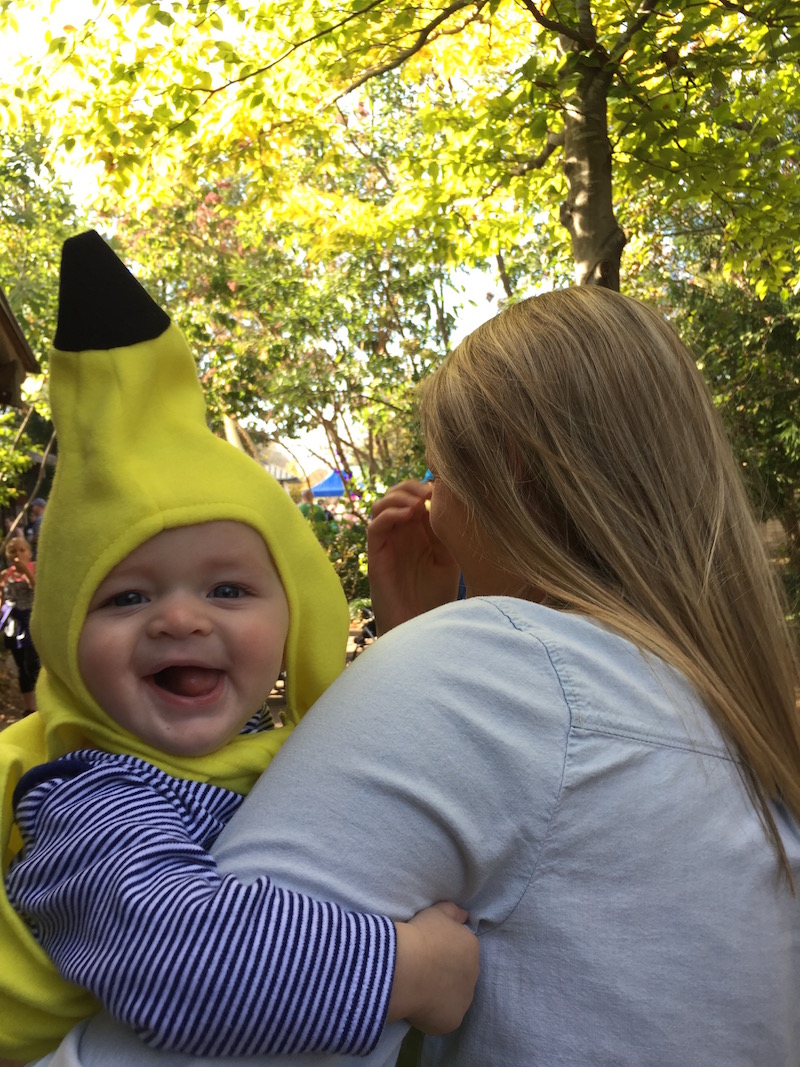 We debated on what to do Saturday and decided to head to the Saint Louis Zoo for Spooky Saturday. We went super early when they opened and were able to go in the Children’s Zoo for free, it’s only free the first hour the zoo is open. 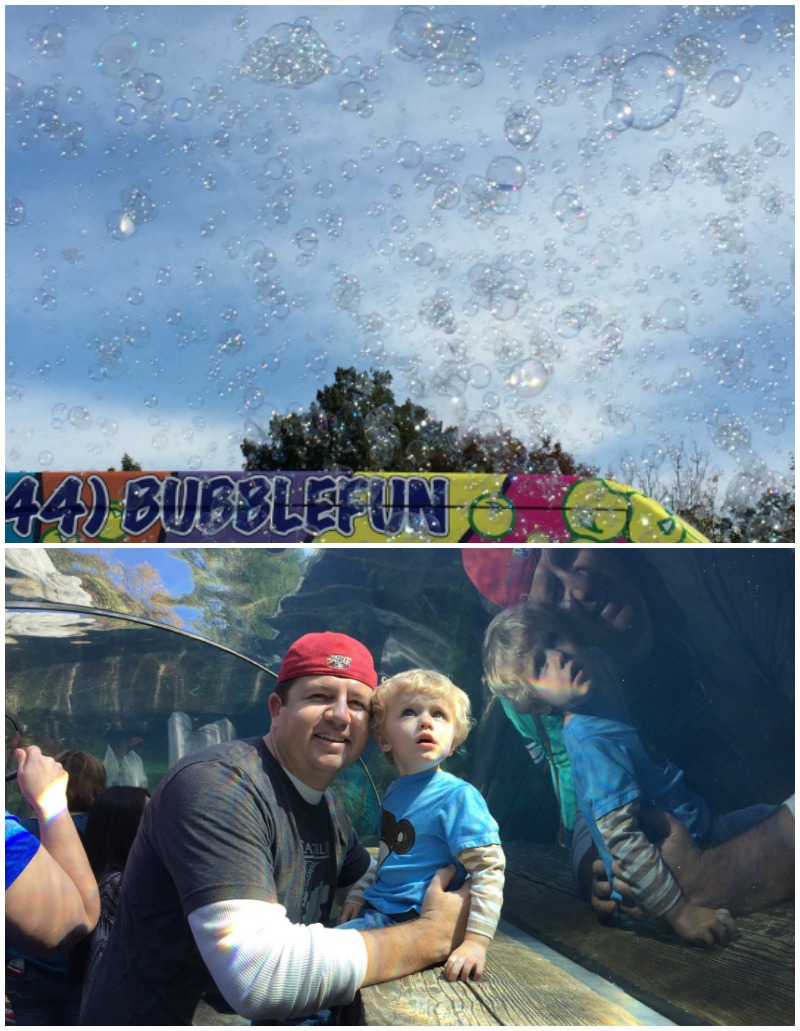 There were lots of little stations of things to do around the Zoo and the Bubble Bus was even there! We didn’t put the costumes on the boys right away, and I wasn’t even sure Jude would wear his at all. He had put it on once at home a few weeks ago but really wasn’t too interested in it. 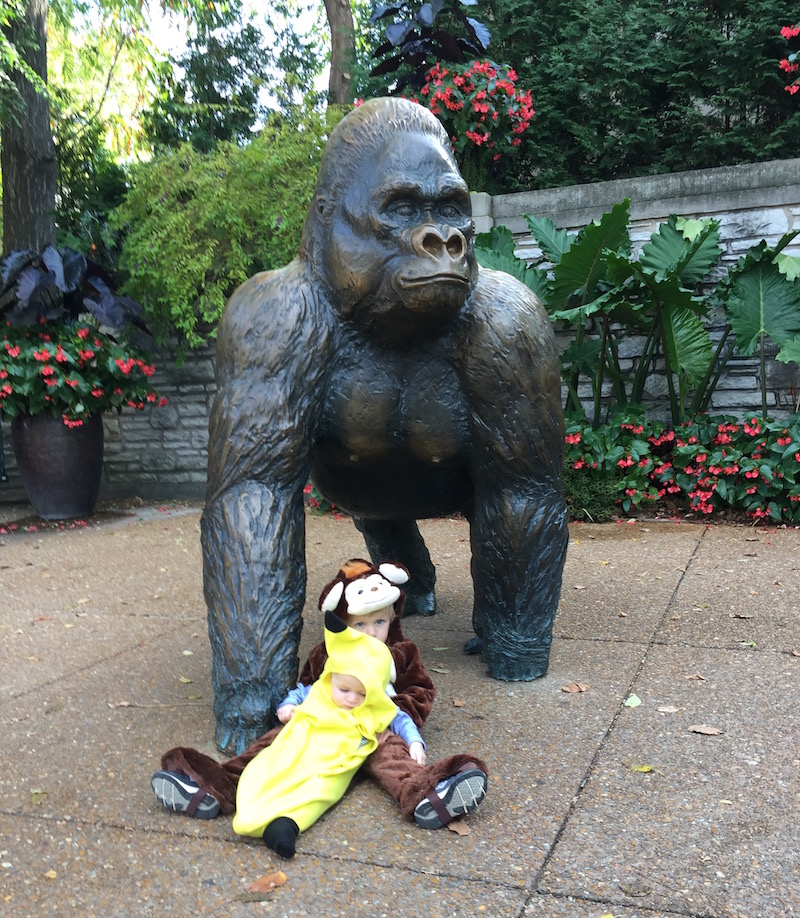 We walked near the monkeys and I decided to see if Jude would put it on. At first, he said no, but once he saw Ezra in the banana costume he thought it was hilarious and wanted to put his monkey costume on right away! 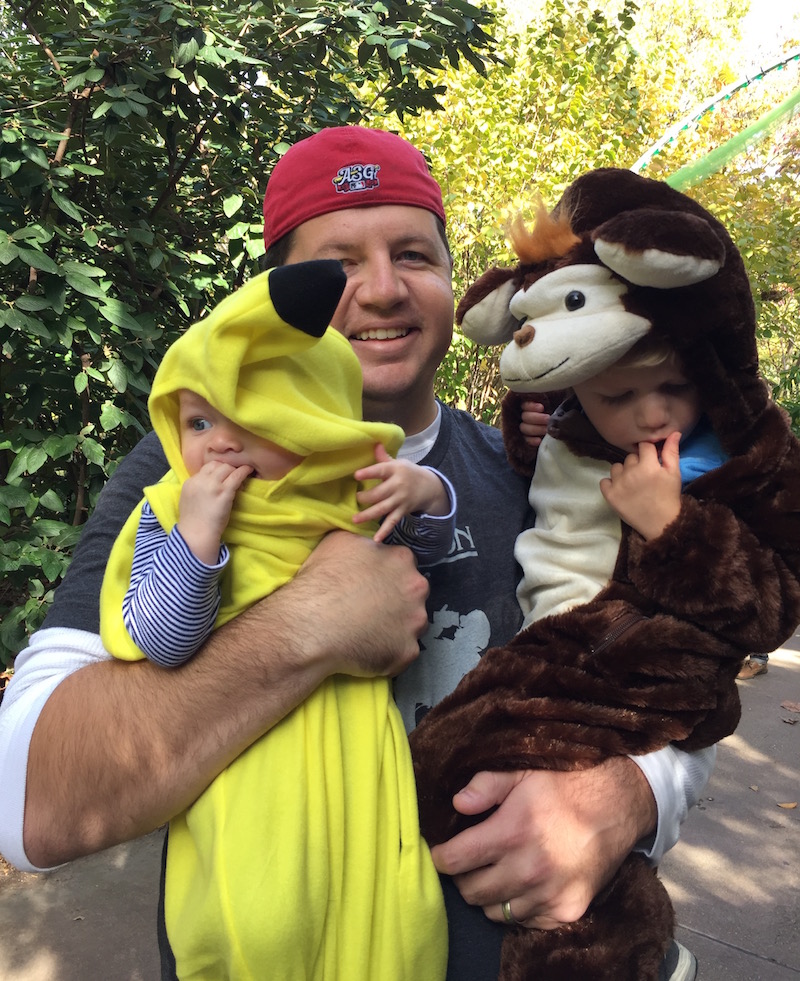 Also, it is impossible to take a good photo of a toddler who can’t stop moving and a baby who can’t sit up. Impossible. 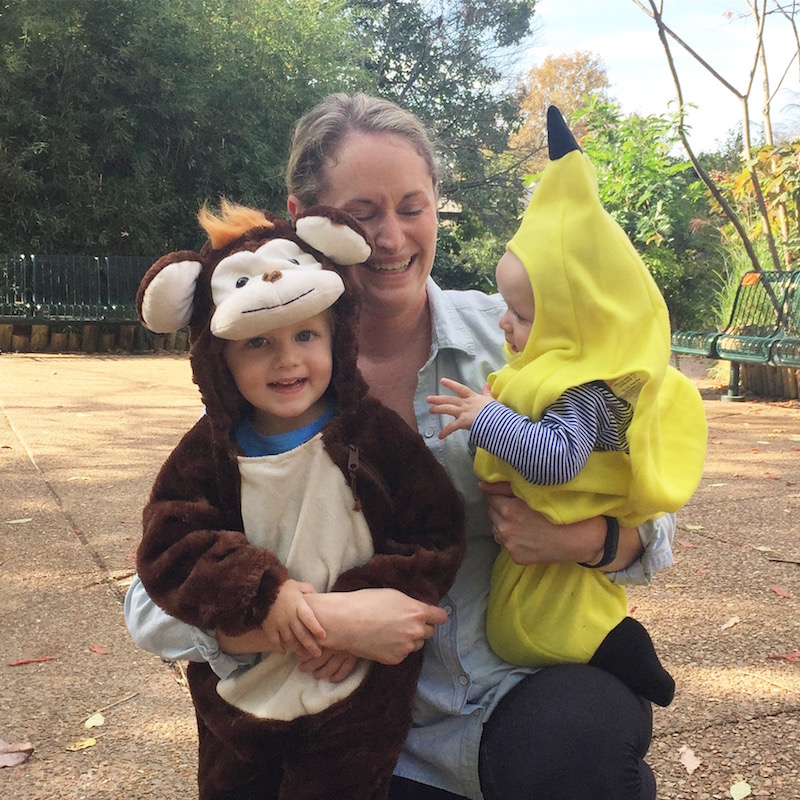 We left right around lunch time and couldn’t decide if it would be a good idea or the worst idea ever to get something for lunch. BTR and I were both starving, but the boys were getting close to meltdowns. We decided to head to the Hill and stop at Gioia’s Deli. Best. Decision. Ever. 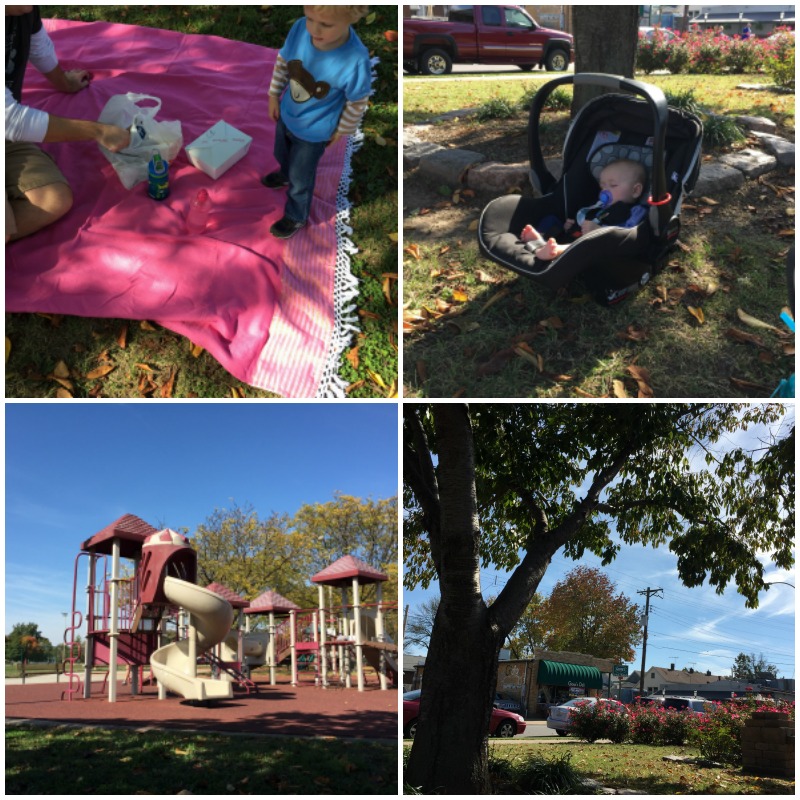 We must have walked in at the perfect time because by the time we ordered the line was out the door. We grabbed our food to go and walked across the street to this amazing little park. I always keep my Lilly for Target beach blanket in the car so we had a picnic! No one melted down and we all got to eat amazing food.

Sunday morning we made Halloween sprinkle waffles for breakfast and had a work day at home. That evening we decided to carve pumpkins! 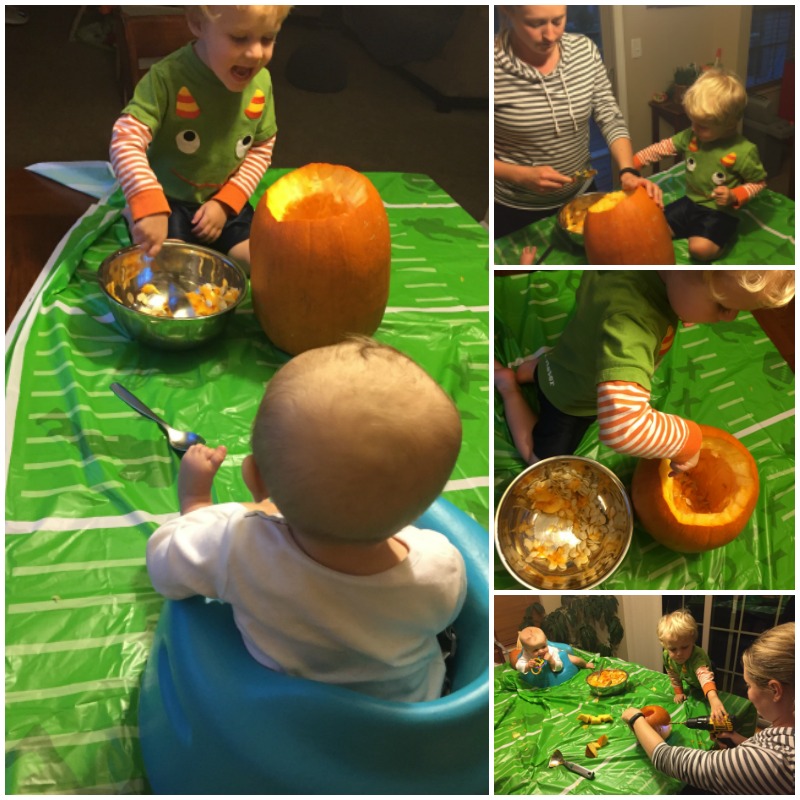 Jude totally got into it and had so much fun digging around inside the pumpkin! BTR gave me one of his drills and I made holes in one of the smaller pumpkins. I had forgotten to buy a carving kit so we had to use kitchen knives. Don’t worry I already bought a kit on clearance at Target for next year! Oh and I saved the seeds from our pumpkin from Eckert’s. I read online that you can dry them and plant them, so here’s hoping we have pumpkins in our backyard next year! 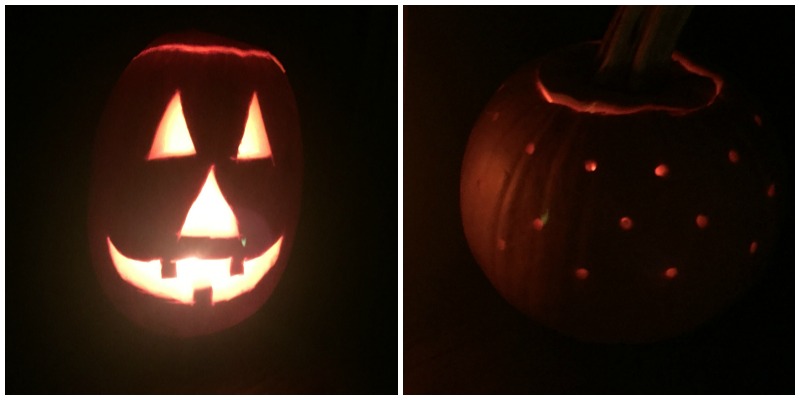 BTR had to work all day Monday and when he came home we made a quick pot of chili and got ready for trick or treating! I didn’t really get Ezra all dressed up in his costume since he was in the car seat attached to the stroller. But we did attempt a few pictures on the front porch before we left. Blue suckers for bribes were required. 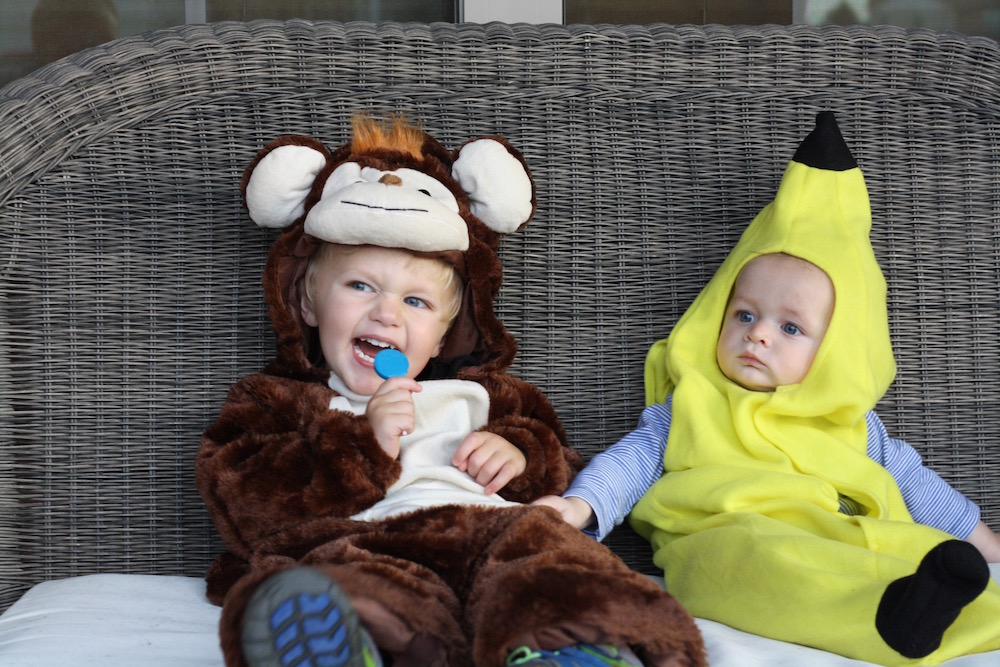 And a family photo! 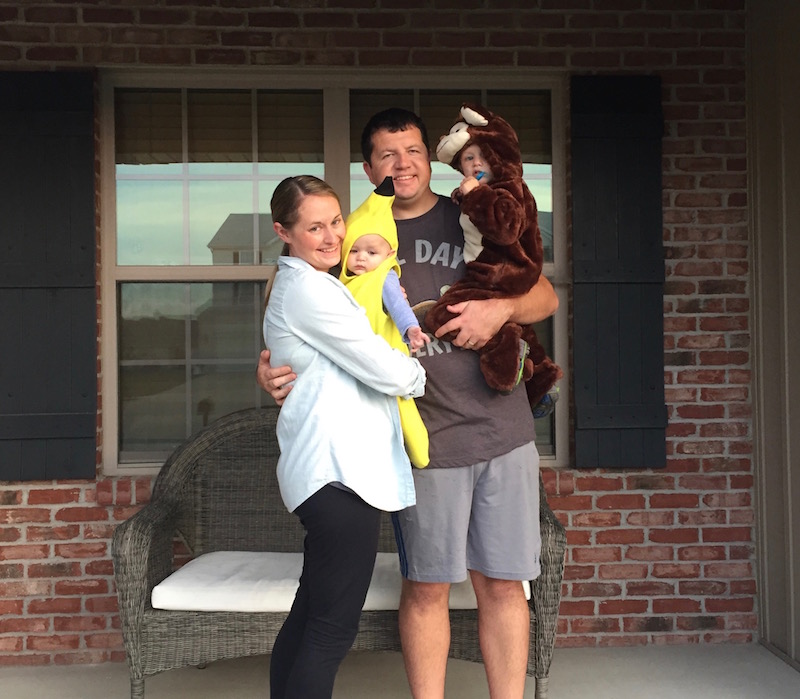 I put glow sticks on everyone and the stroller and once it was dark we headed out! Jude was super shy the first few houses and wouldn’t even talk to our neighbors. But once he realized they were giving him candy he would yell “MORE CANDY” every time we left a house. He kept running and tripping and asking to hold our hands, it was all so adorable! And Ezra slept 95% of the time. 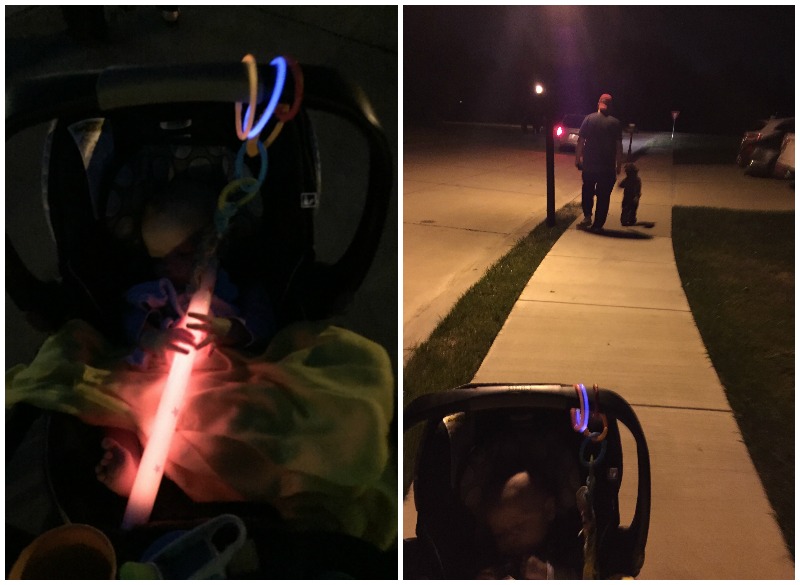 We came home and sorted through Jude’s candy and let him eat a few pieces. He actually hasn’t asked for any since, which surprises me! And I totally overbought on candy again, so we have tons of leftovers! 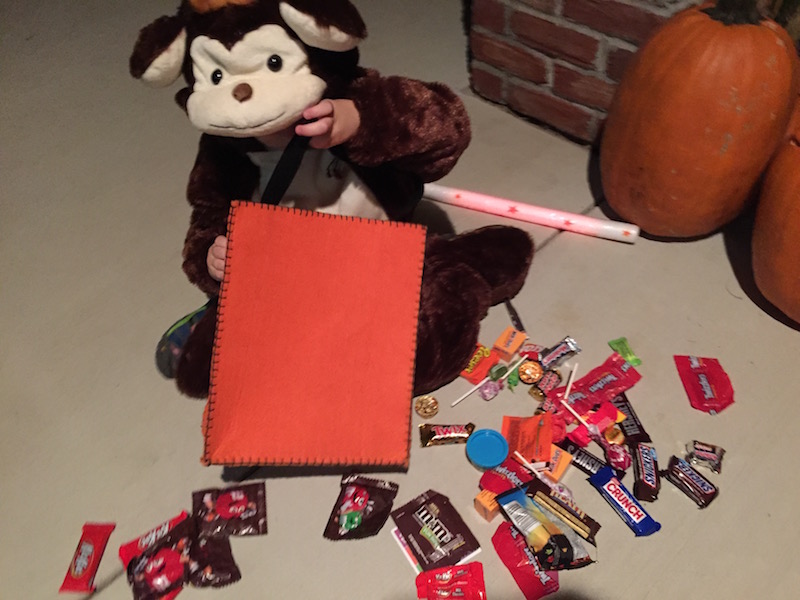 The whole night we were out I kept looking for the fire truck to drive through but it never came. Well, I was putting Jude into his pajamas and BTR came running in to tell me he saw it. I grabbed Jude (who had no shoes on) and literally ran down the street so we could see the truck. But it totally made Jude’s night so it was worth almost throwing my back out carrying him and running!

I hope you all had a fun and Happy Halloween!