This post was sponsored by Creative QT but all opinions are my own. We love supporting other small-parent owned businesses! This post contains affiliate links.

I’ve been wanting to make Lego table for Jude for months and I finally got around to it. It’s the easiest DIY Lego table you’ve ever seen. You only need a few things to make this happen. And thanks to Creative QT for partnering with me on this project, they are awesome and I can’t wait to share their product with you! 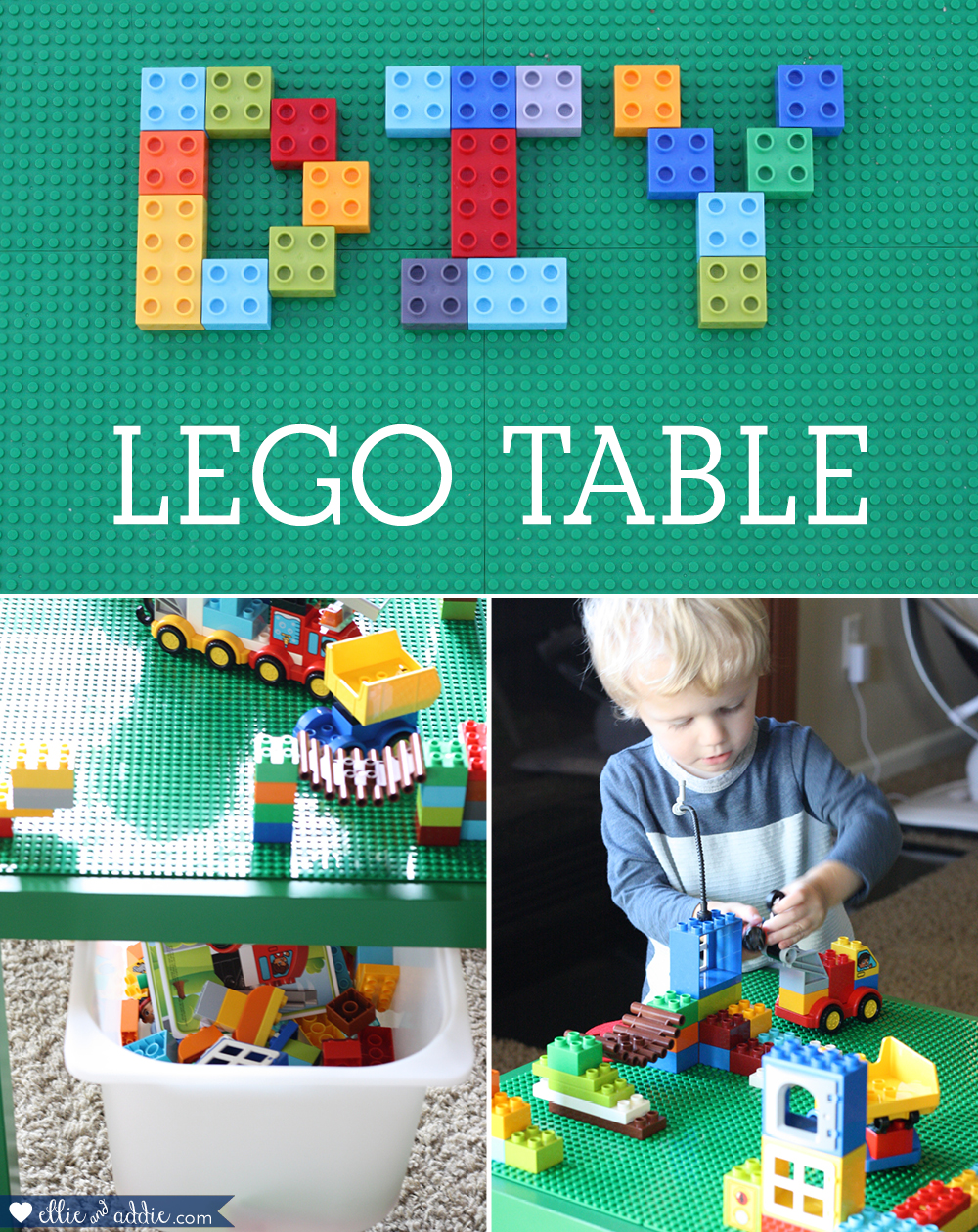 You know you’ve got a good husband when he takes you to IKEA on a Friday night for your birthday. Because we’re wild and crazy like that. And since both kids semi-behaved we treated ourselves to ice cream on our way out. Again, wild and crazy around here. 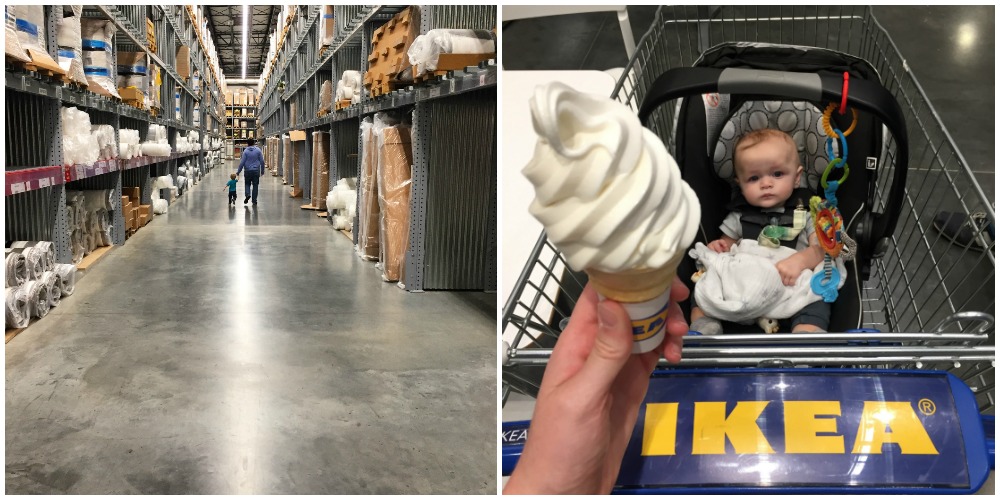 Shockingly we got exactly what we went to IKEA for and came home with just that. Okay fine maybe like two extra things. But not like an entire cart (not that I’ve ever done that…) And then because he really loves me, on Saturday morning I made him help me put it all together. Because that’s what good husband’s do, they interpret IKEA directions. 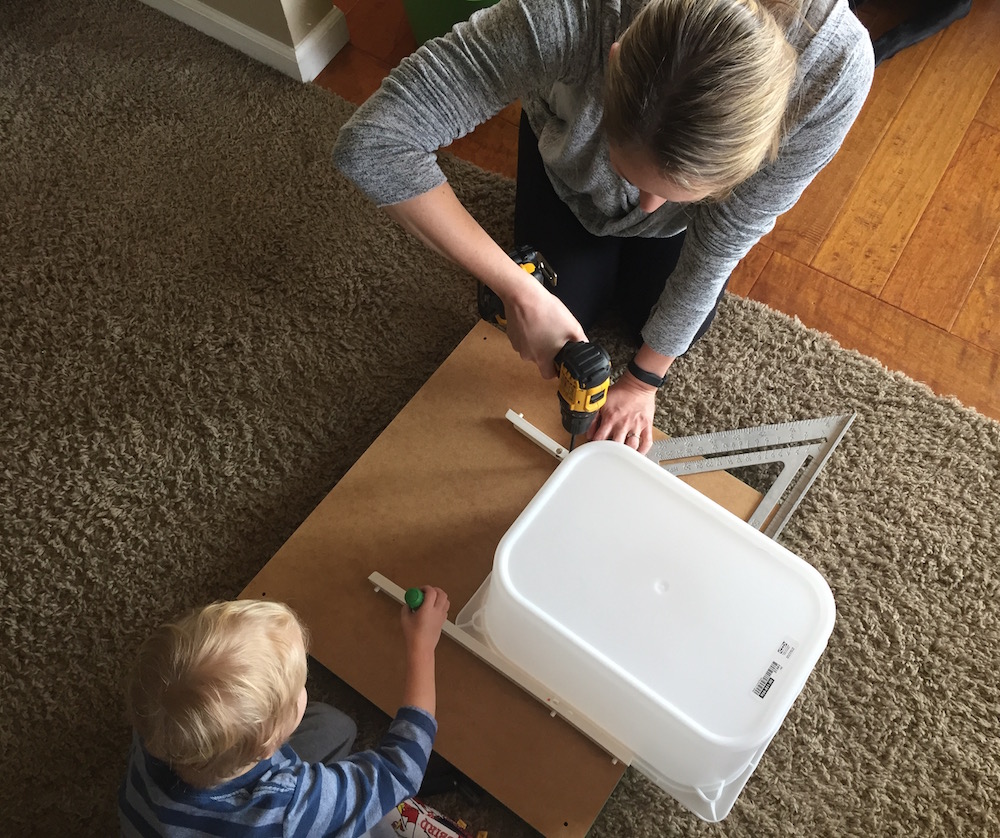 Okay now about those IKEA Trofast rails. Normally the Trofast bins are meant to slide into the storage shelves they make, but I wanted it to attach under my Lack table. BTR was going to build rails out of wood, but I wanted to make it easier than that. So I went to the customer service desk and asked if I could buy some extra rails, he looked up the part number from the directions of the shelf and found them in the back and gave them to me for free! Just proves it never hurts to ask! And then we didn’t have to turn on the Sawstop for this project! :) 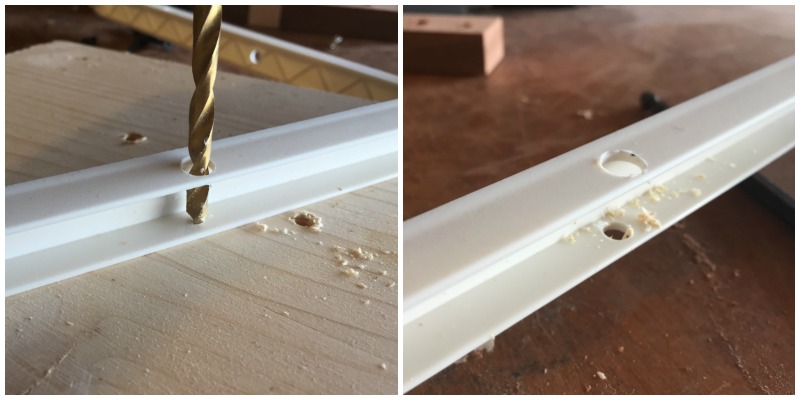 At home, BTR took the rails and drilled holes (on both sides) in them so we could attach them to the bottom of the table. With the holes on both sides, it made it easier for us to get the drill into screw them to the table. Now you could probably sidestep the drilling completely and just use glue, but I wanted to make sure this wasn’t going anywhere. I also drilled a small piece of wood to the back of where the bin would go so it wouldn’t fly out the other side when we slid it in. Or I should say Jude screwed that piece in! 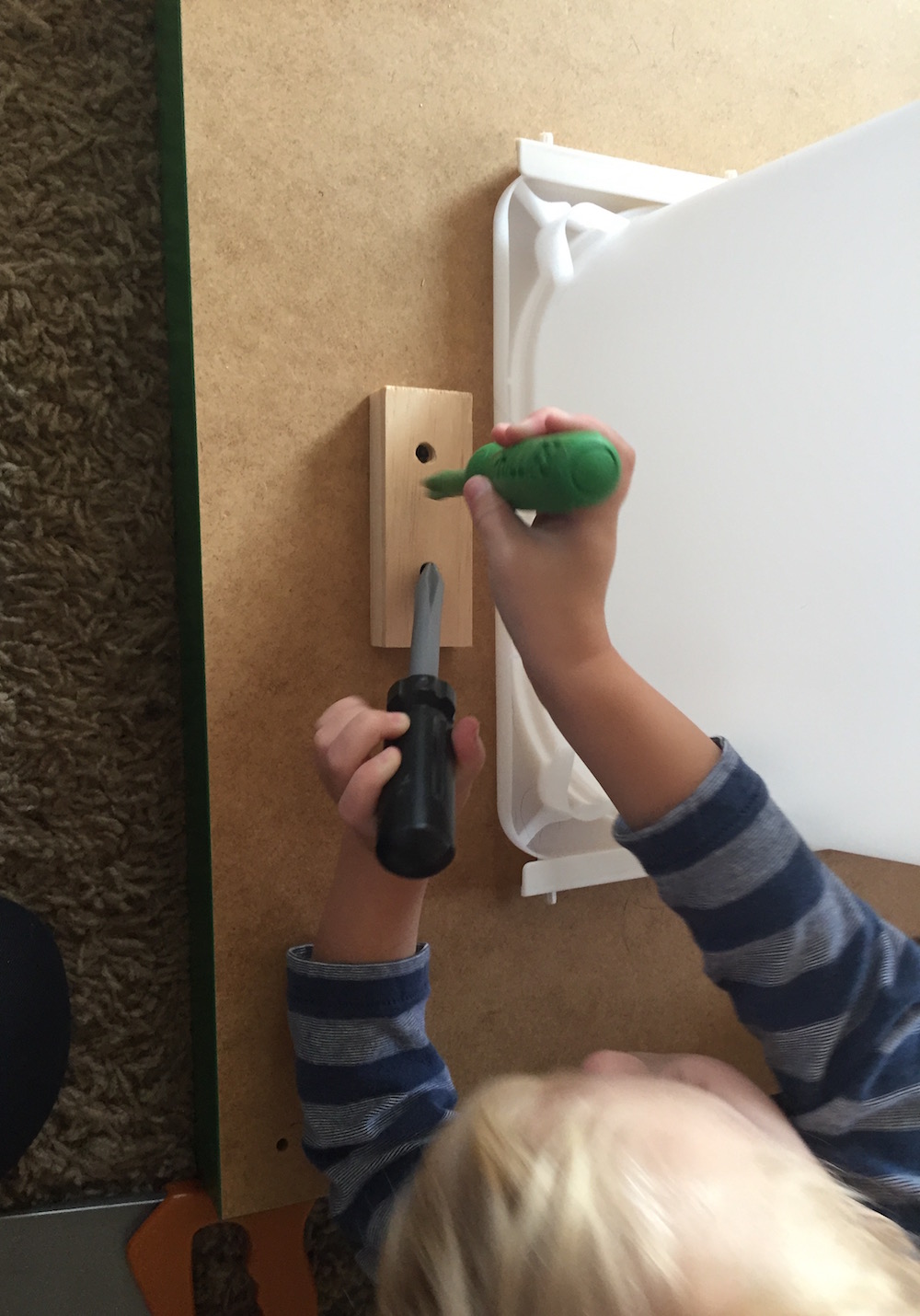 Once the rails were screwed in, we added the legs to the table. Which is super easy to do because it’s literally just screwing the legs to the top, no tools needed! Yes, Ezra is attacking that dish towel. He was super helpful during all of it. 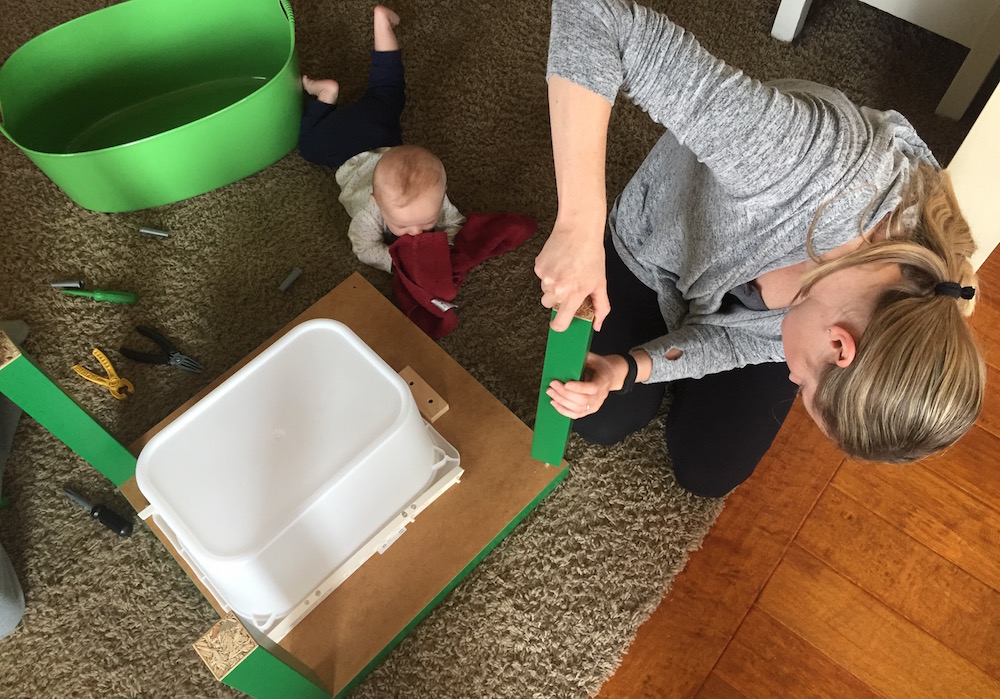 Okay next comes the fun part, adding the baseplates! I chose these baseplates by CreativeQT because they are peel-and-stick, no glue or screwing required! There are super easy instructions that come with the plates on how to prep your surface and attach the plates to your table. 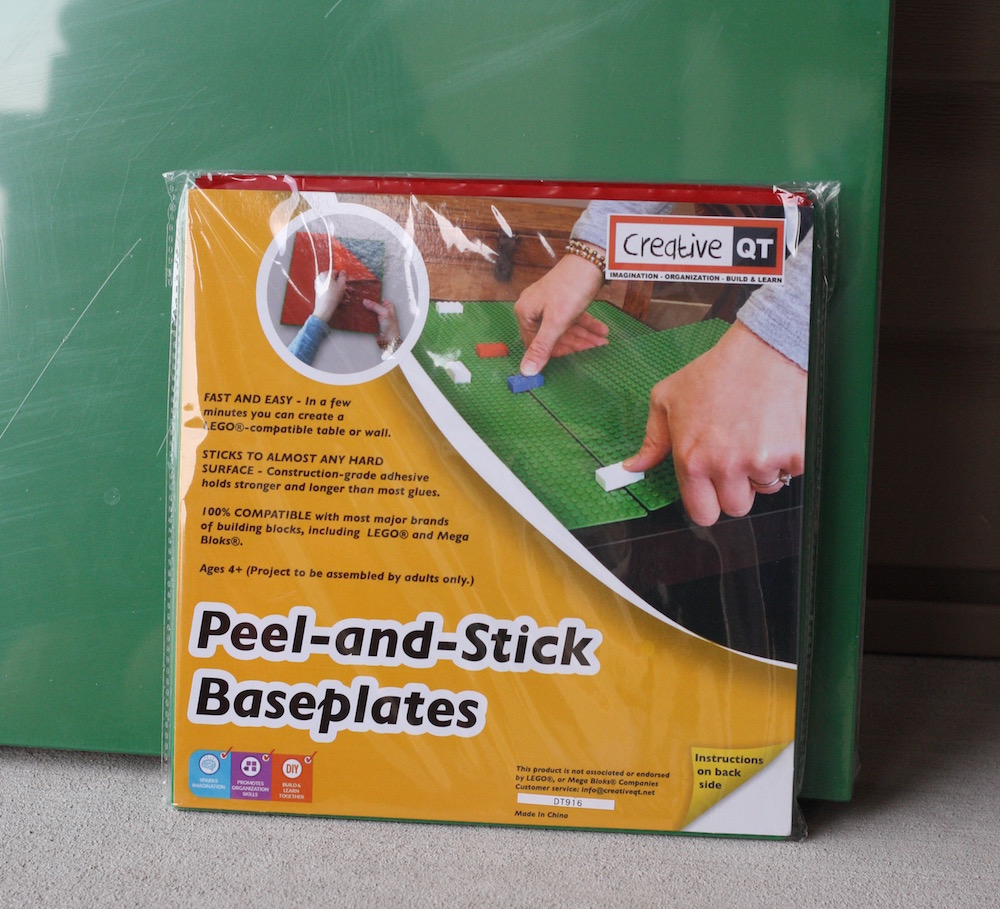 Another reason I loved these baseplates was the company they came from. I chatted with the owner, Adam, and he was the nicest person ever! He and his wife own the company, and you know how I feel about small-parent-owned businesses. It’s close to my heart! :) 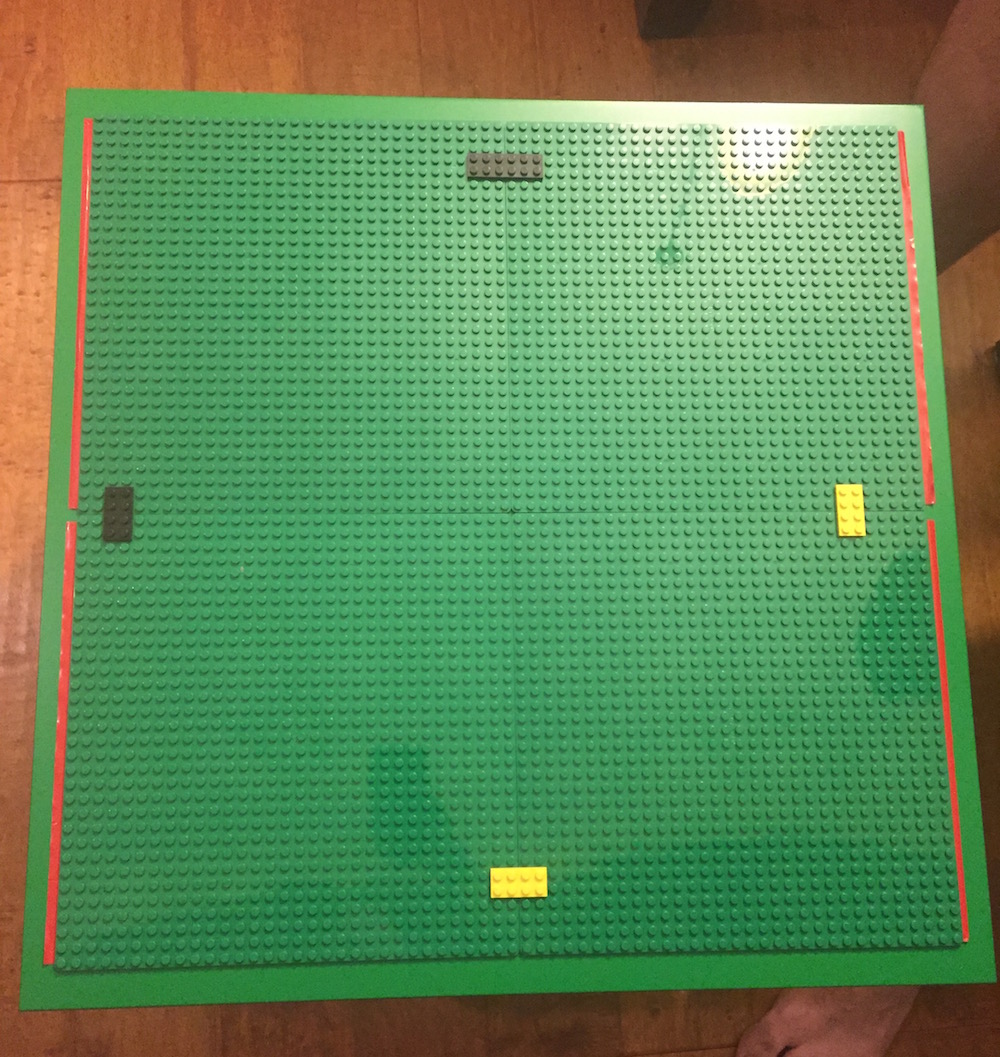 We lined the plates up to each other with some Legos and then traced around where we wanted them. Then we slowly took one plate up at a time and applied it to the top of the table. 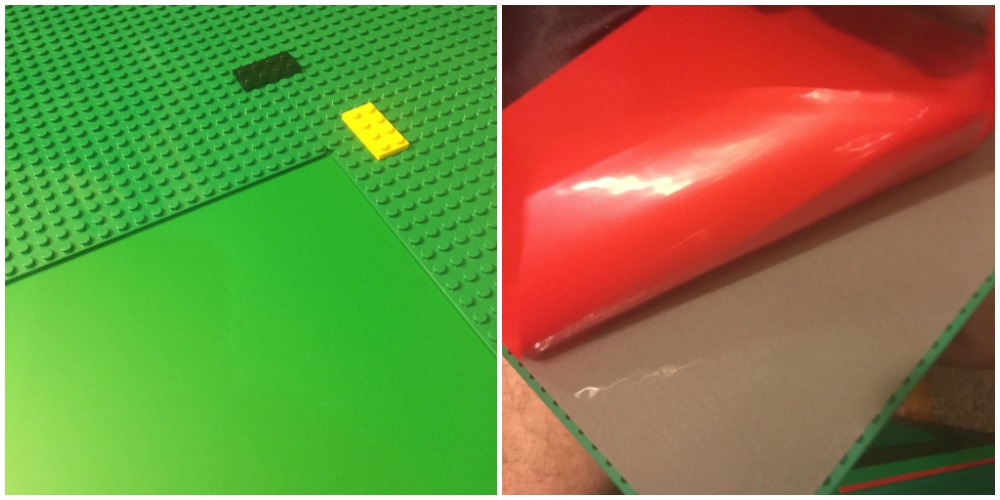 It was ridiculously easy. And then I wanted to wake up Jude to play with it right away. BTR said no. That was probably the right decision. :) 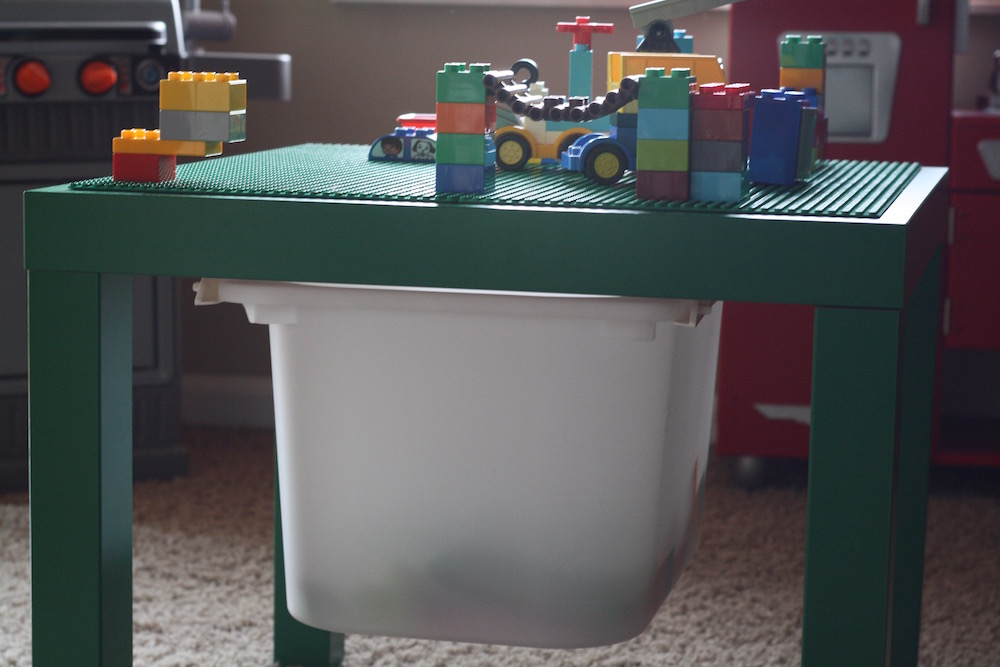 But I was totally ready for him the next morning! 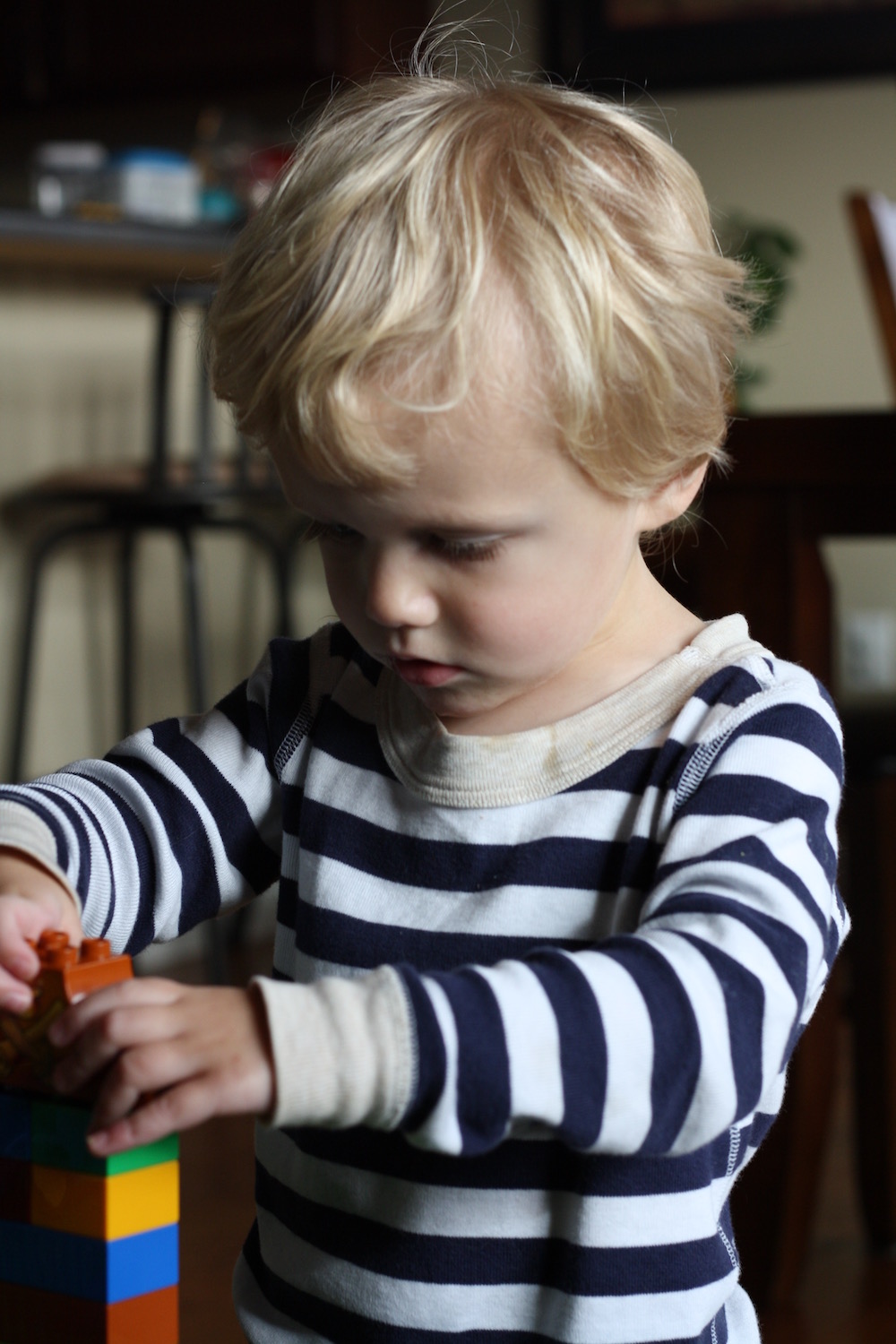 Before we had this table Jude would play with his Legos for maybe 5 minutes at a time and then move on to the next toy. Now that we have the table he plays for hours on end. And I LOVE it so much! I also love that now all our Legos have a home when they aren’t being played with. 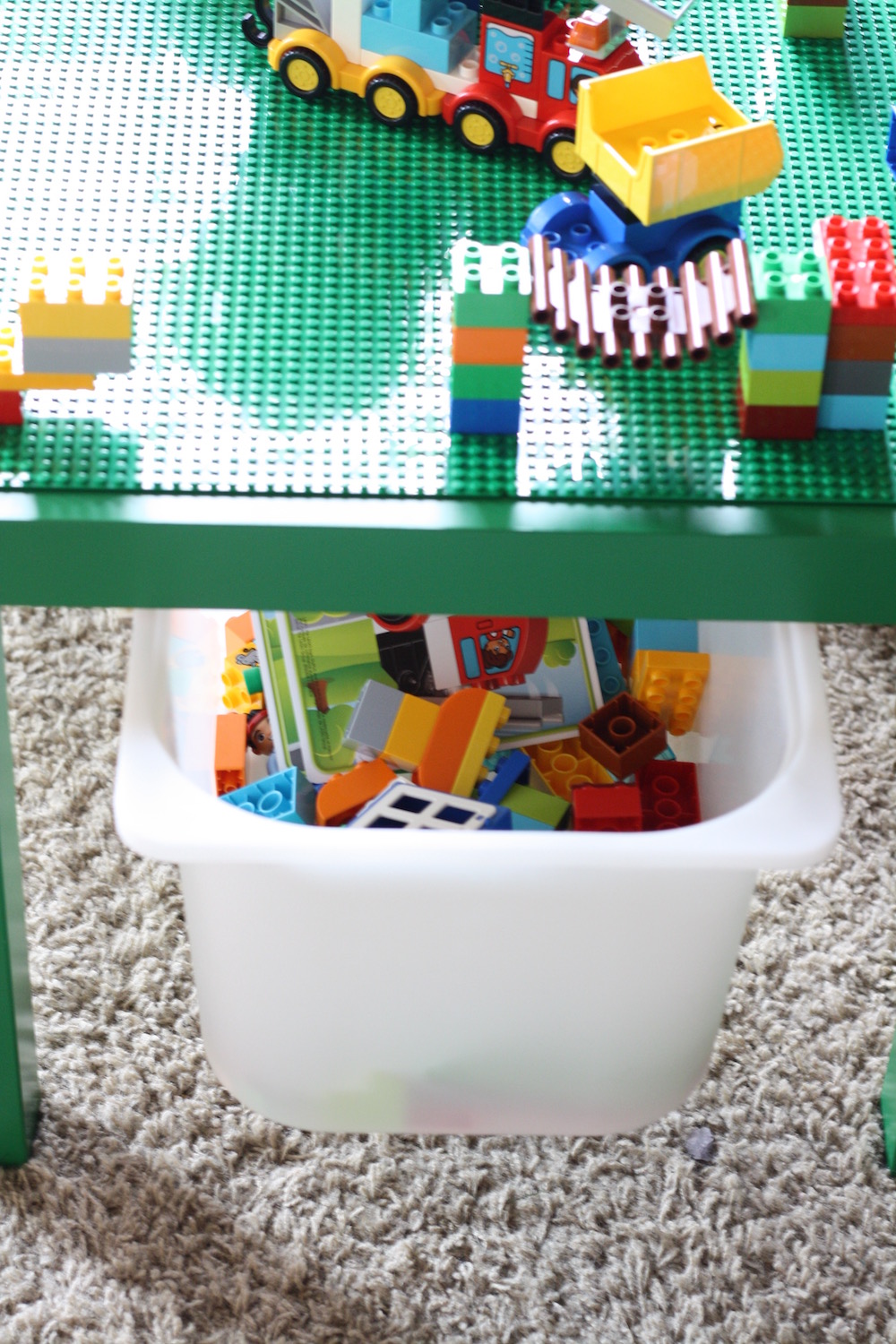 I also picked these baseplates because they are compatible with so many different sizes of Legos. 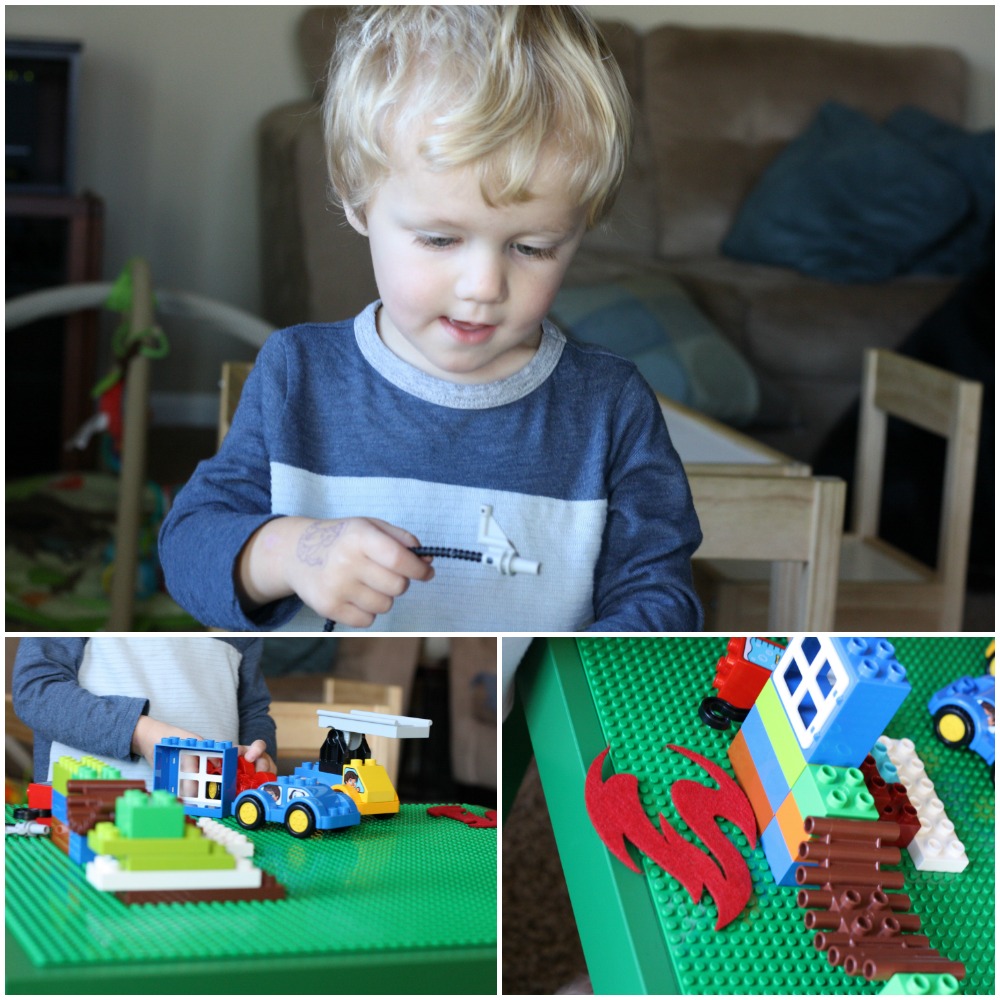 Right now Jude is playing with Duplo Legos, but I know eventually he will want regular sized ones. And this table will be able to grow with him and his Legos! 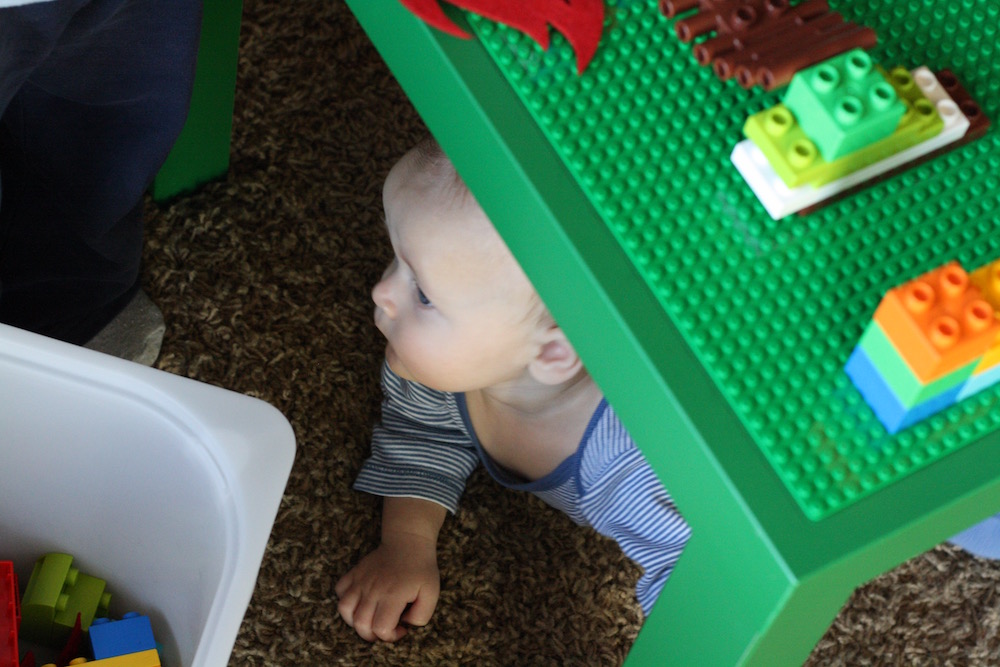 And don’t worry, Ezra likes to help play by crawling under the table. And it drives Jude crazy. The start of a beautiful sibling rivalry! :) 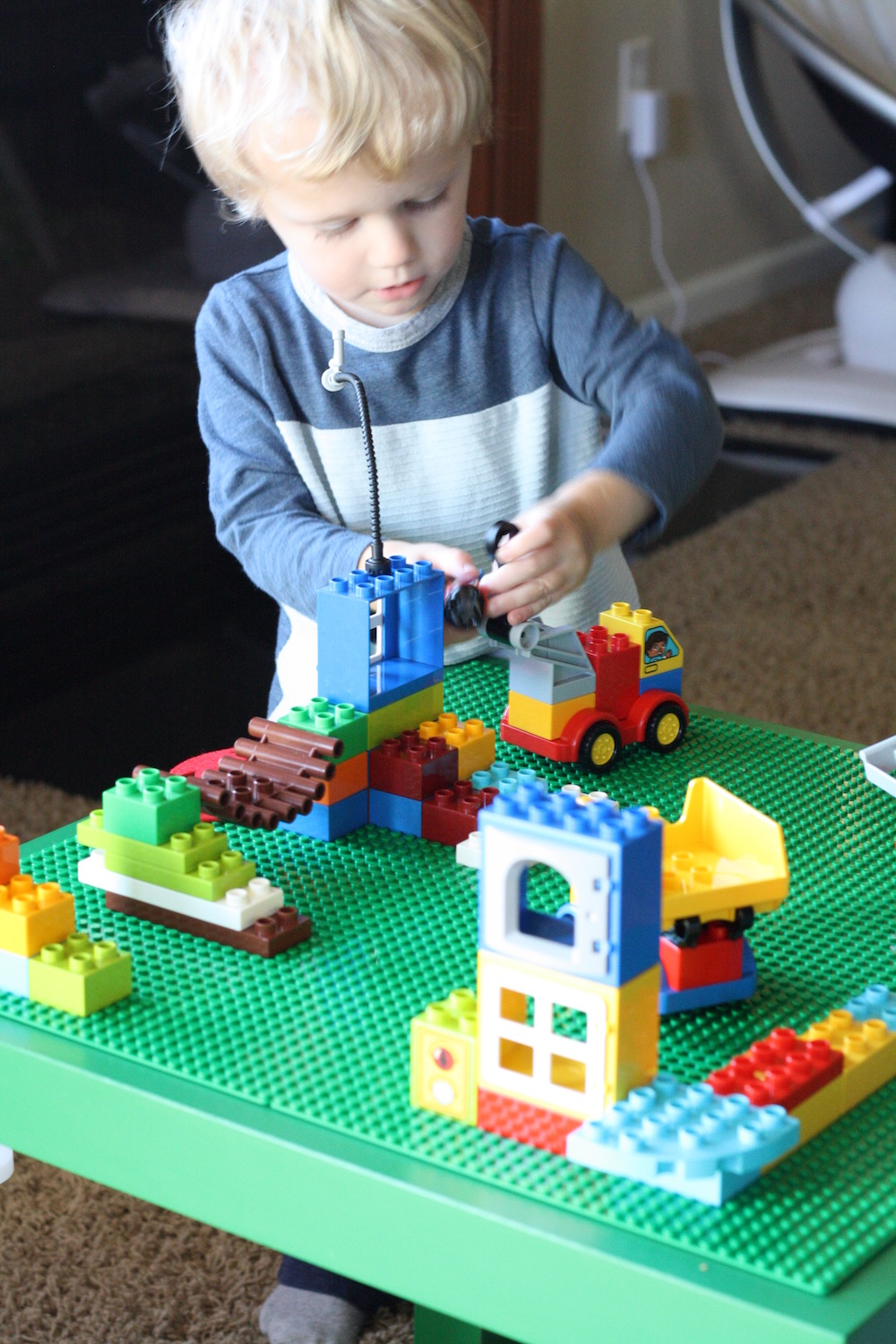 I’m so excited with how this DIY project turned out, I’m not sure if Jude or I love it more!