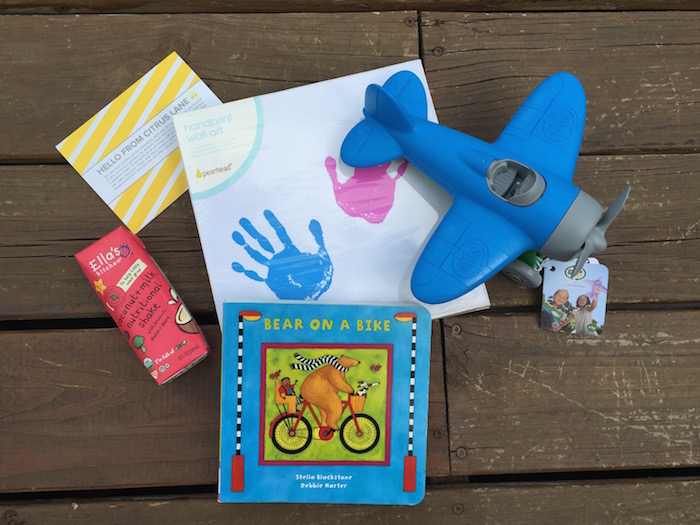 Airplane from Green Toys
So funny that we received this airplane in his box when I had just ordered him one from that Amazon flash sale! This one is a different color on the bottom, so I think we’ll just keep both (I had already opened his other one so we couldn’t return it). But I do really love these toys and honestly don’t mind having two!

Handprint Art Kit from Pearhead
I’m just eh over this. I’m more interested in getting toys for Jude to play with than crafts for me to do. And considering I own my own craft store, I could easily make something very similar on my own. I’ll probably end up using this canvas for something else than his handprints, no big deal.

Bear on a Bike from Barefoot Books
Of the nine months we’ve gotten Citrus Lane boxes, we’ve gotten books 5 times. I don’t want to sound like a broken record (and I LOVE books! I do!), but I’d really rather get toys? Does that make me sound like a bad parent? Actually don’t answer that.

Nutrition Shake from Ella’s
I’ve seen Ella’s products in Target but I’ve never bought anything. We haven’t tried this shake yet, but we’ll see if he likes it. Maybe I’ll be adding these to our shopping list in the future?

Special Offer from YogaDownload.com
Don’t get me started on them actually considering this an “item” in our box. Because it isn’t and it actually causes me to spend more money if I were to use it. #stepsoffsoapbox

The value of this box was around $40 (not including the yoga coupon), which again, is great for what I paid!

So like I said this was our last Citrus Lane box for now. I stopped our subscription since all of our prepaid months (that I had bought with various deals and/or coupons) had run out. Maybe if I see another deal in a few months we’ll sign up again? I did really enjoy getting these and it was fun to try out new toys I may not have known about or bought on my own.

Don’t forget you can sign up and get 50% off your first box using my referral code (and I’ll get a shop credit if you do, so thanks in advance)!