Hey everyone! I know it’s already Tuesday, but I wanted to recap our weekend since we had so much going on!

I snapped this photo Thursday night when BTR pulled into our driveway. 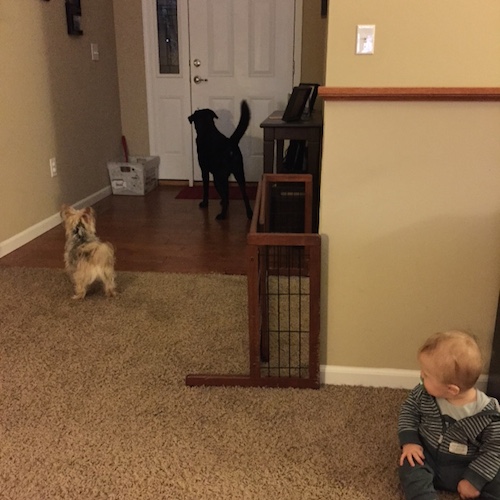 The pups always hear his truck coming down the street and they get super excited, which makes Jude very curious as to why they are barking at the door.

BTR had a half day on Friday so we headed over to STL for lunch and went to Steve’s Hot Dogs on the Hill. I had a Chicago dog and BTR had a hot dog with Mac and Cheese on top of it and then we split a cup of Mac and Cheese with bacon. It was really yummy! It definitely isn’t a Hot Doug’s (I still dream about duck fat fries!) but we would go back.

After hot dogs we went to Trader Joe’s to stock up on some of our favorite essentials, including cold brew coffee and orange chicken.

Saturday night we went to our friend’s house for their gender reveal party. It was so much fun and they had confetti cannons to do the reveal!

Sunday we lounged around and did nothing. BTR had been under the weather and was trying to catch up on sleep. But Sunday night I got to have a girl’s night out with some of my favorite STL bloggers!

I met Sara, Lindsay, Dacy, Grace, and Jessica at Cardwell’s at the Plaza and I had an amazing pasta dish with mushrooms. Along with a much needed/deserved glass of wine! 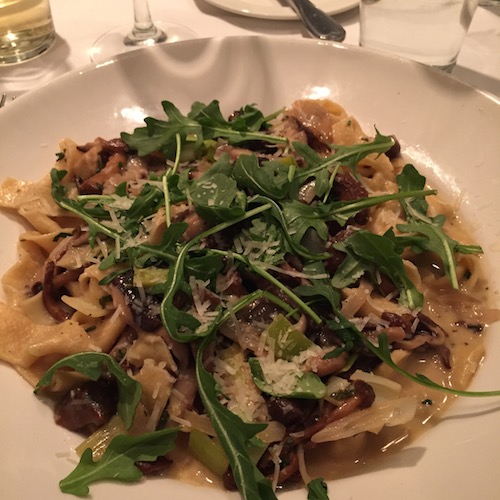 It is always so much fun at these dinners catching up on each other’s lives, and we had a new friend join us this time, Grace of Camp Patton (congratulations on the new baby on the way Grace!)!

While I was gone and BTR was on baby duty, somehow this happened. He found Ellie with the tail, but we aren’t actually sure that she did it. It was probably Addie. Luckily my mom can sew!

Yesterday was just a regular Monday at home with Jude (and working) and Jude’s favorite new game is pushing both dog bones around the kitchen floor. Yes we have a living room full of toys, but the dog bones are so much more fun.

Also you may have already seen this on Instagram, but yesterday Jude took a 2 hour nap. On top of me. But I had already finished shipping orders and didn’t have anything else to do. So we took a break together.

I think I may have caught whatever sickness BTR had because today I am not feeling 100%. All I want to do is sleep on the couch and all Jude wants to do is crawl down the hallway. So I made a fake gate so he can’t get past the couch.

We are planning on making a chicken pot pie for dinner and it sounds so delicious. So until then I am going to rest on the couch and watch my little guy play. Have a good Tuesday!