This post is sponsored by Phillips 66. All opinions and love of baseball and road trips are my own. #I70Series #RivalryRoad

What a perfect end to summer, an amazing road trip where we followed the Cardinals across the state on I-70 and back. Oh and did I mention the home town boys took all 4 games of the series! 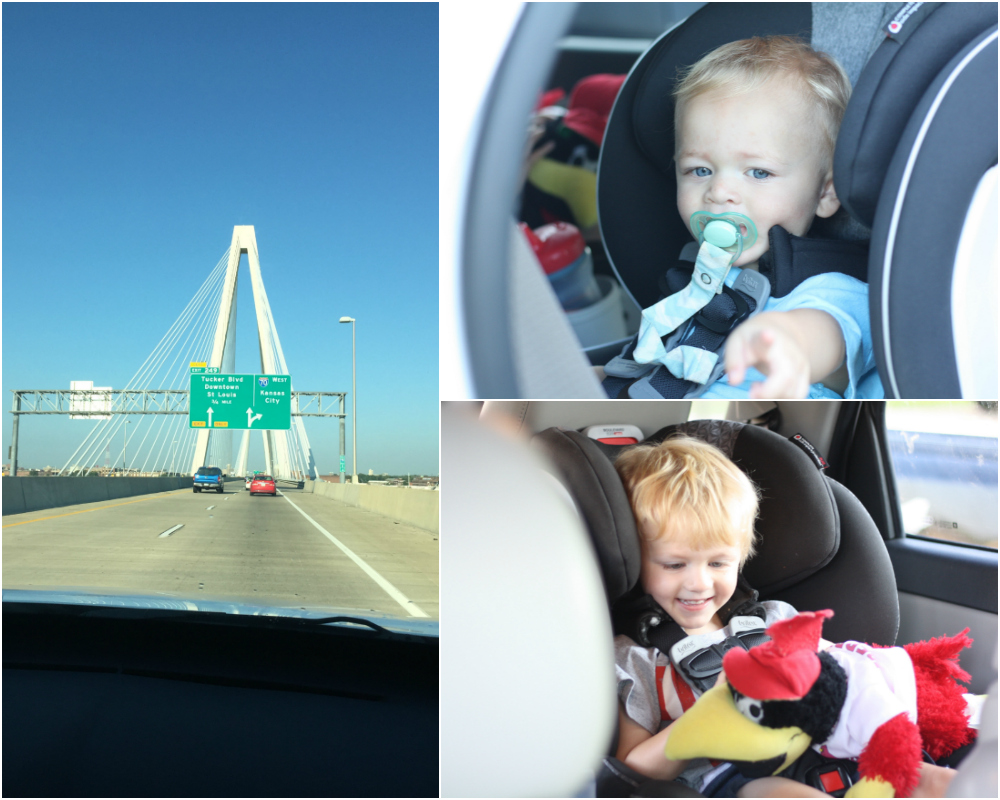 Our trip was a blast! We packed up the car and Fredbird and headed west early Tuesday morning. It was such a pretty morning and we were ahead of schedule (an actual miracle with toddlers) so we stopped in historic St. Charles to fuel up on gas and coffee at Phillips 66. While there we ventured down to the beautiful river front to see this statue of Lewis and Clark and their dog! 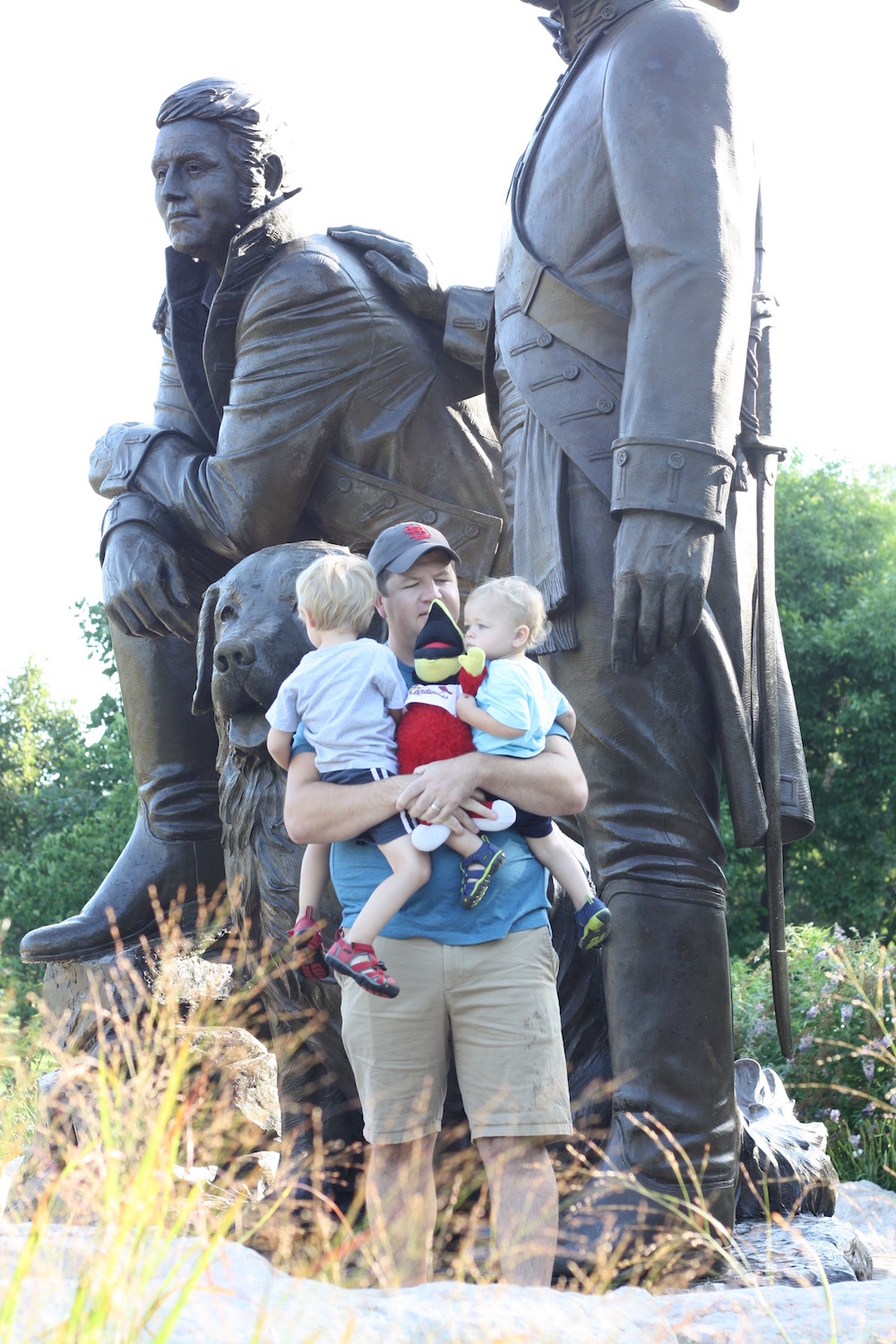 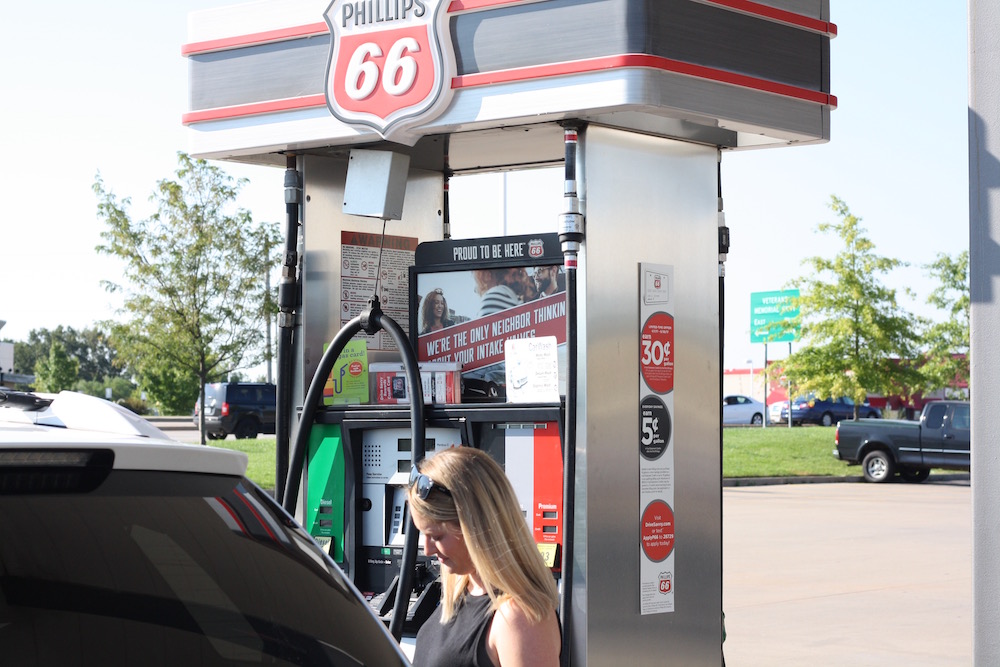 After our quick stop in St. Charles, our next destination was Columbia, MO, home of the University of Missouri. 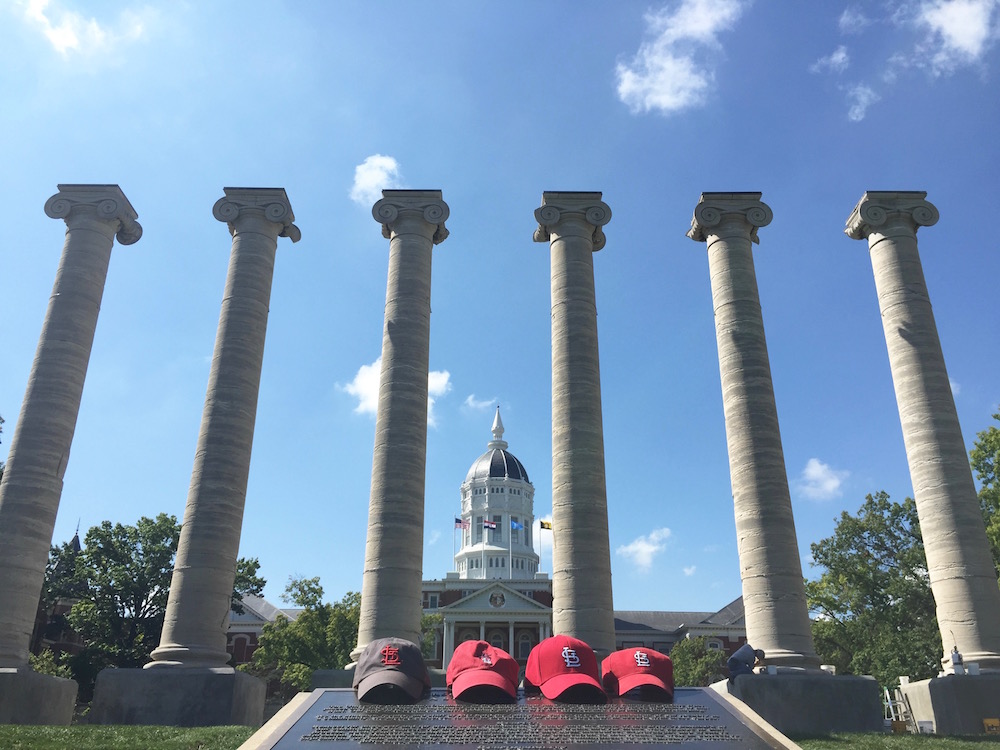 I had never been on campus and loved driving around and exploring! In the middle of campus is the old columns from the academic hall that burned down in 1892. 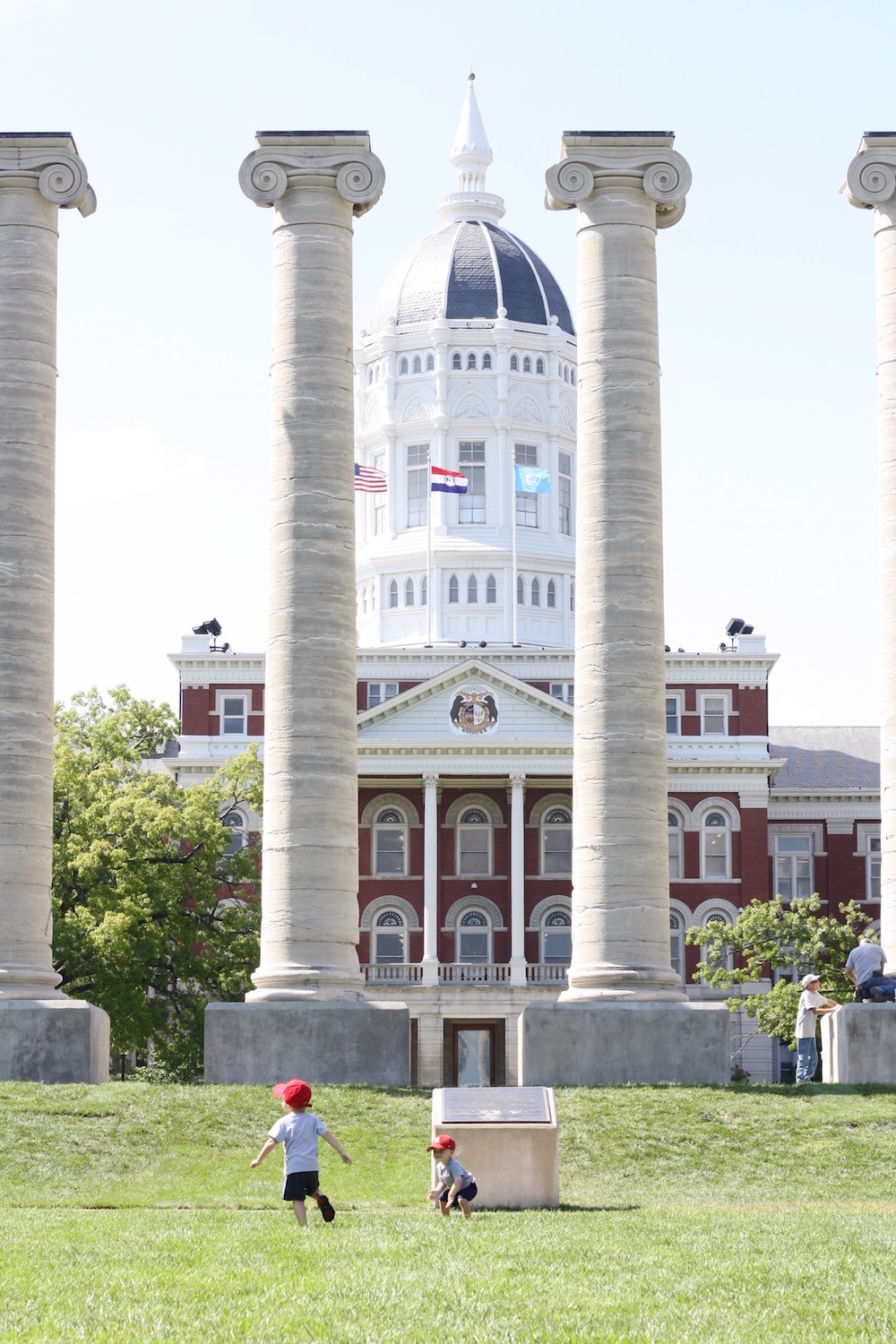 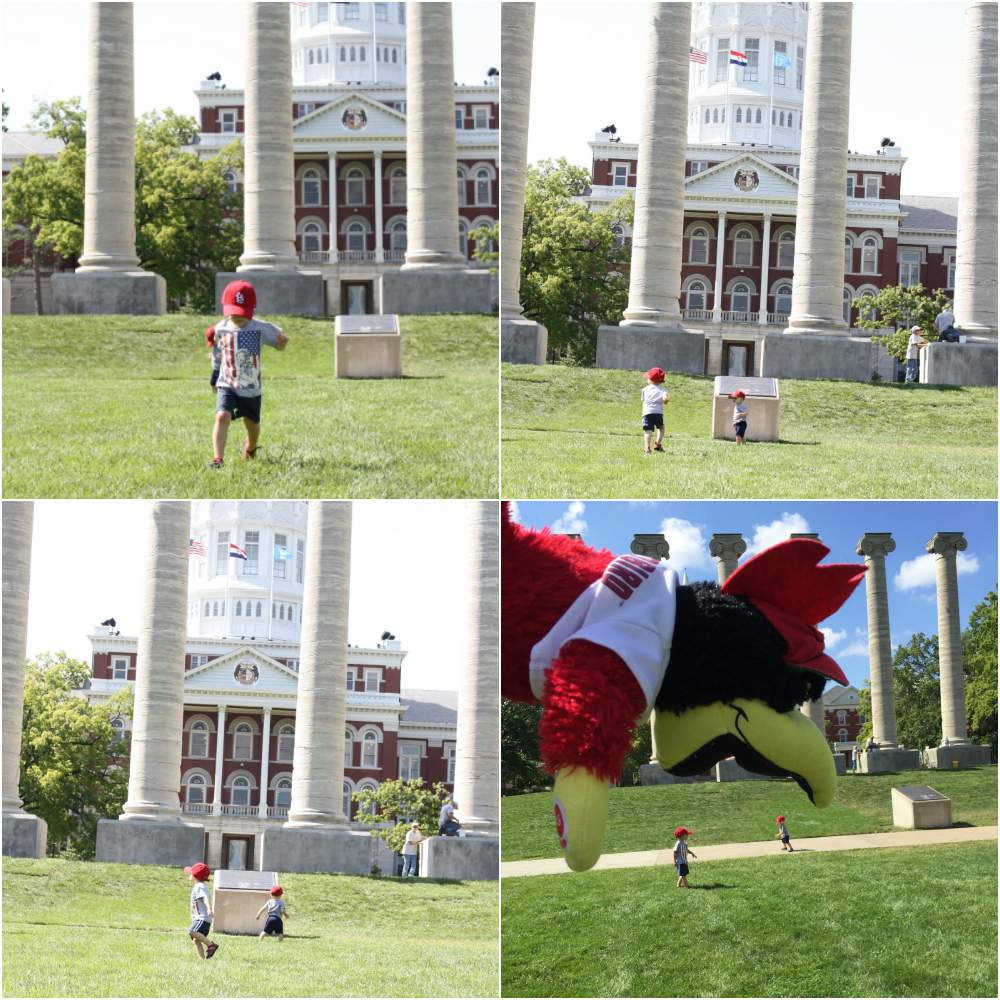 It is such a beautiful sight! The boys had fun running around in the big field for about a half hour stretching their legs! 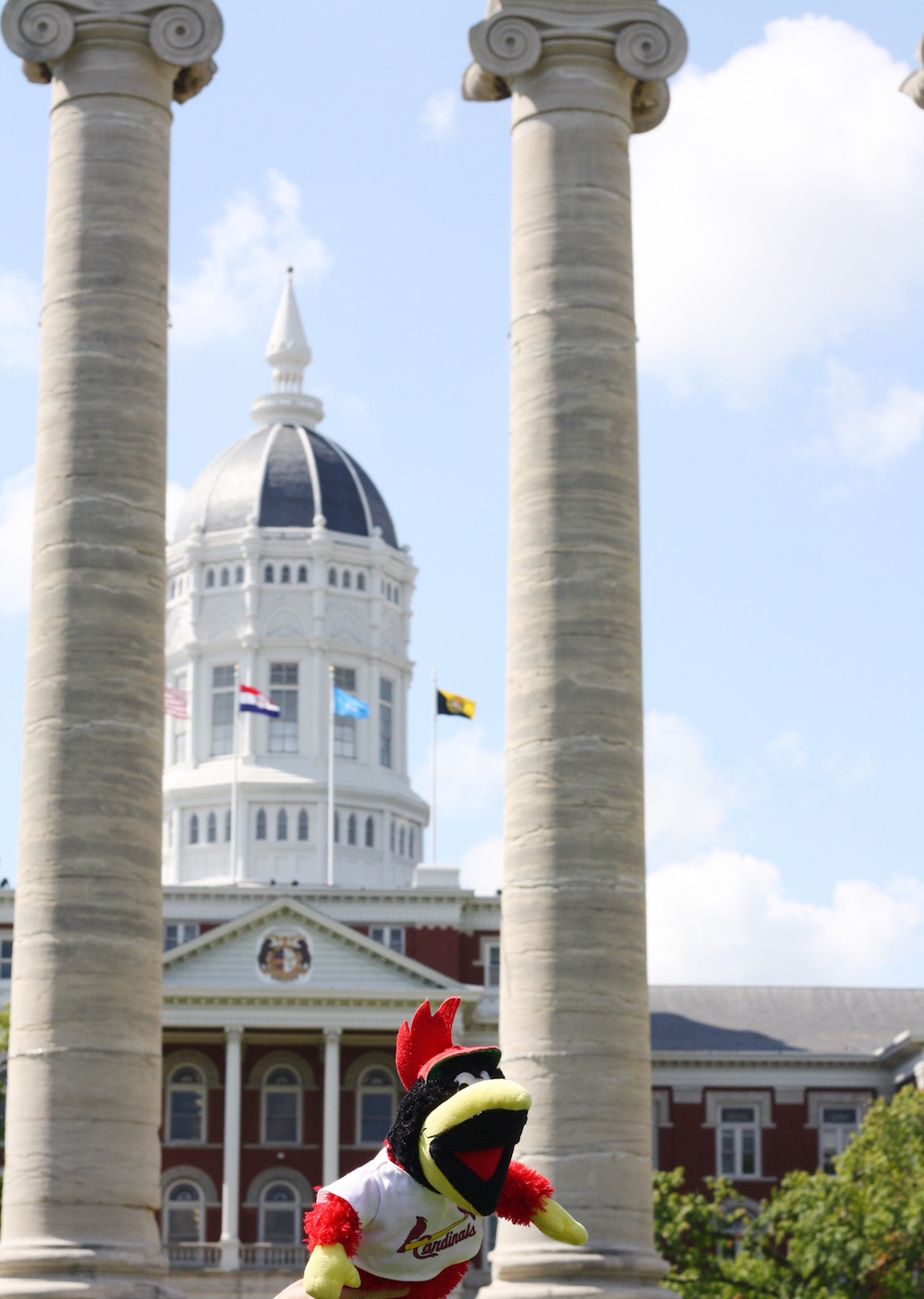 We decided to head over to Shakespeare’s Pizza for lunch. All of our friends that went to Mizzou said it was a must! We were able to get pizza by the slice and some garlic bread in a fun environment! 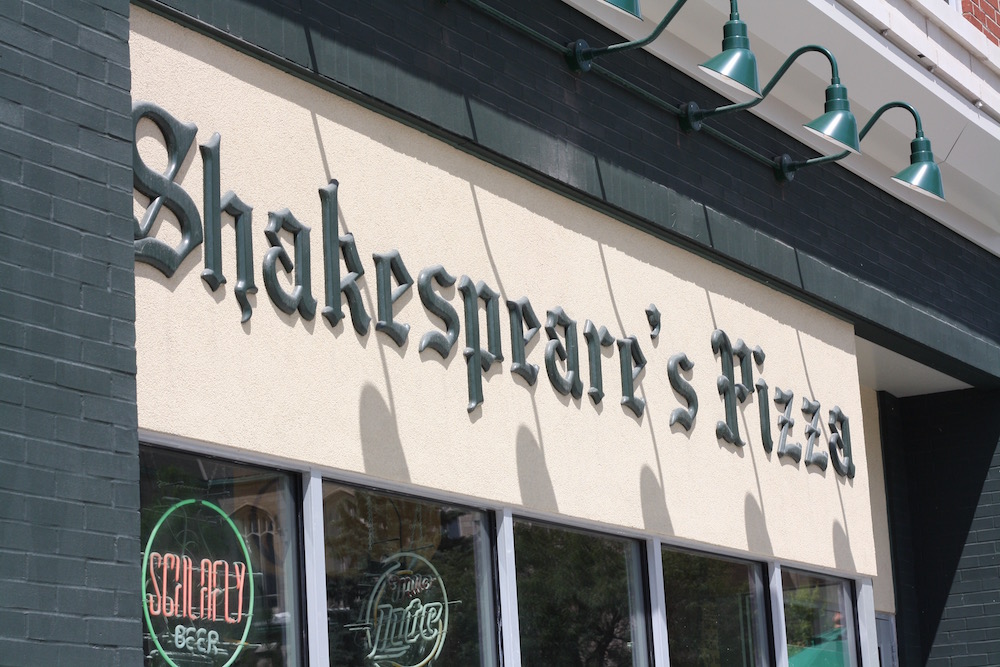 After lunch, we drove just a bit down I-70 to make a quick stop at Warm Springs Ranch in Boonville, MO. We didn’t have time to schedule a tour that day, but it is on our bucket list for this fall. It is the home of the breeding facilities for the Budweiser Clydesdales. Rolling hills, white fences, and a big red barn, it was the perfect backdrop for a Fredbird picture! 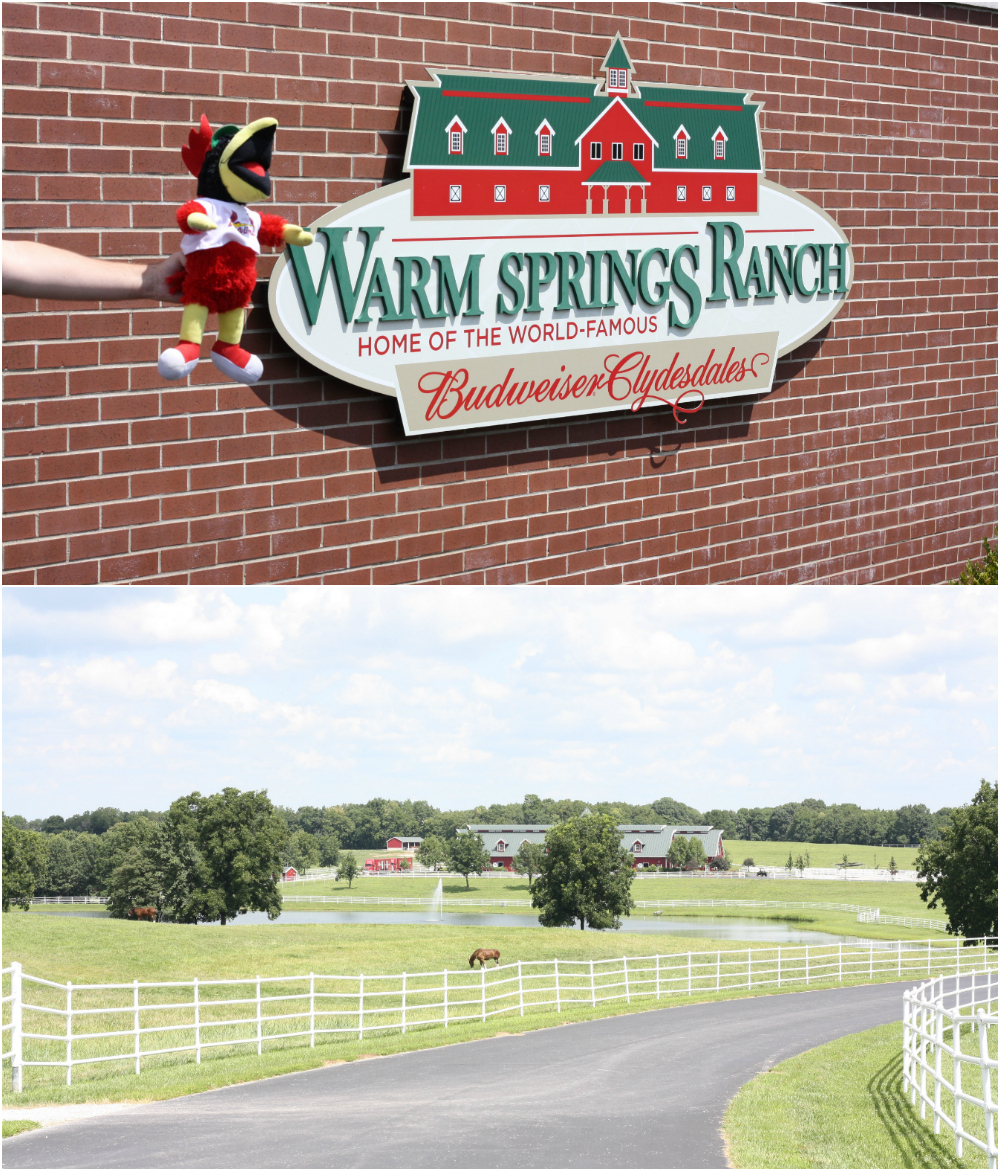 The boys really did so great the whole car ride to KC with our built in stops and plenty of snacks! No joke we had to stop at like four Phillips 66 gas stations in a row for Jude to use the potty. Oh, potty training…. :)

Our next stop was the main destination, Kansas City! The first thing we saw when we got to the city was Kauffman stadium right off I-70! It was so cool and Jude got so excited when we told him we were going there to see a baseball game that night!

Our first stop in the city was the 18th and Vine Neighborhood. It’s known as the Jazz District and has tons of history including the Jazz and Negro Baseball Hall of Fame Museum. We didn’t have time to do a full museum tour, but we did get to stop at a little park a block away and see an amazing mural honoring the Kansas City Monarchs. 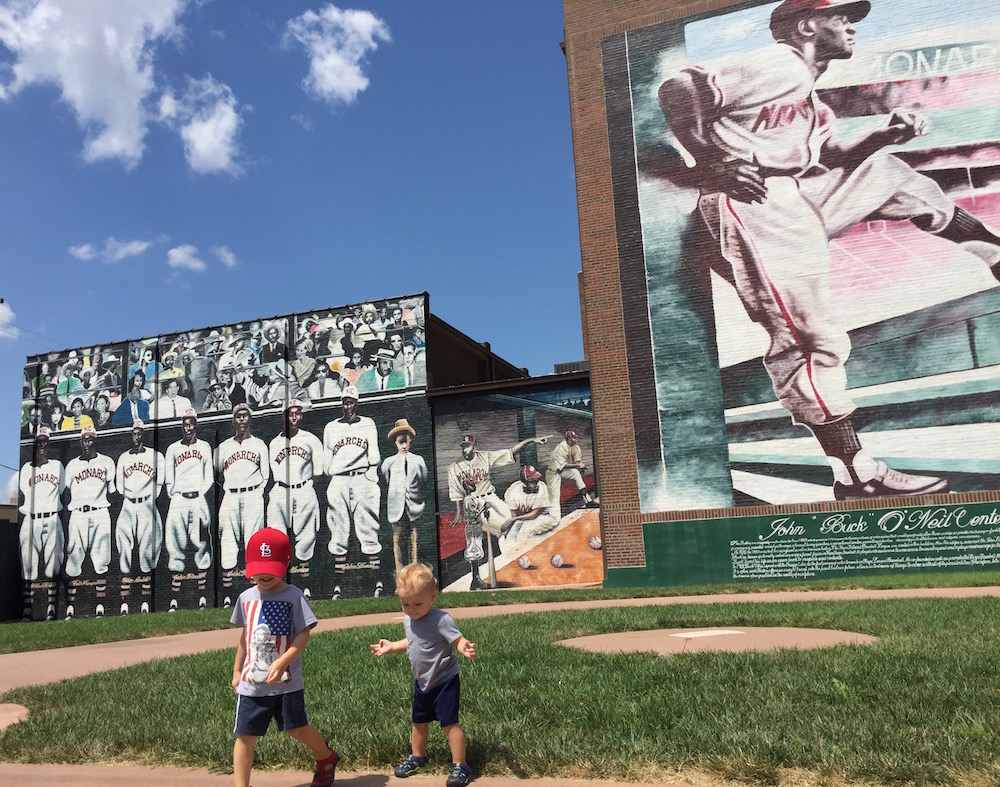 Brandon wanted to tell the boys all about Satchel Paige, the boys just wanted to run the bases! We will definitely be coming back to tour the museum! 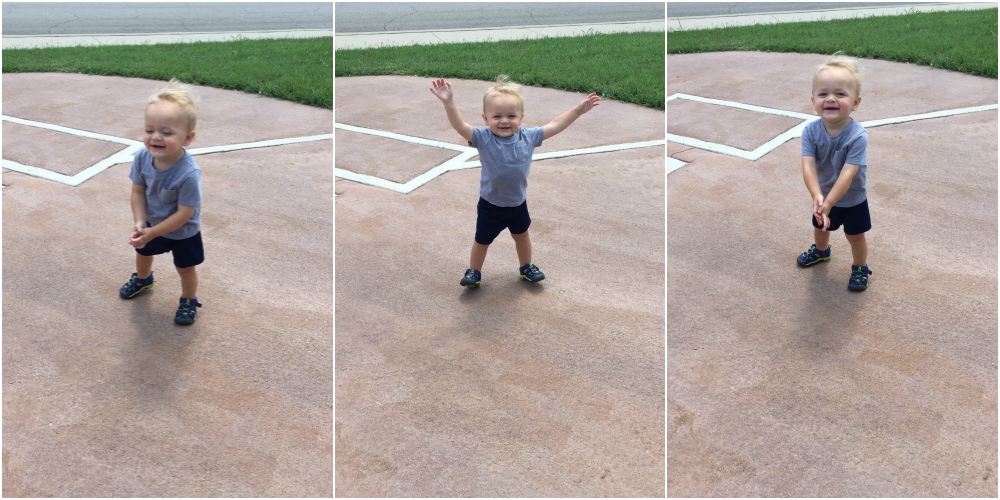 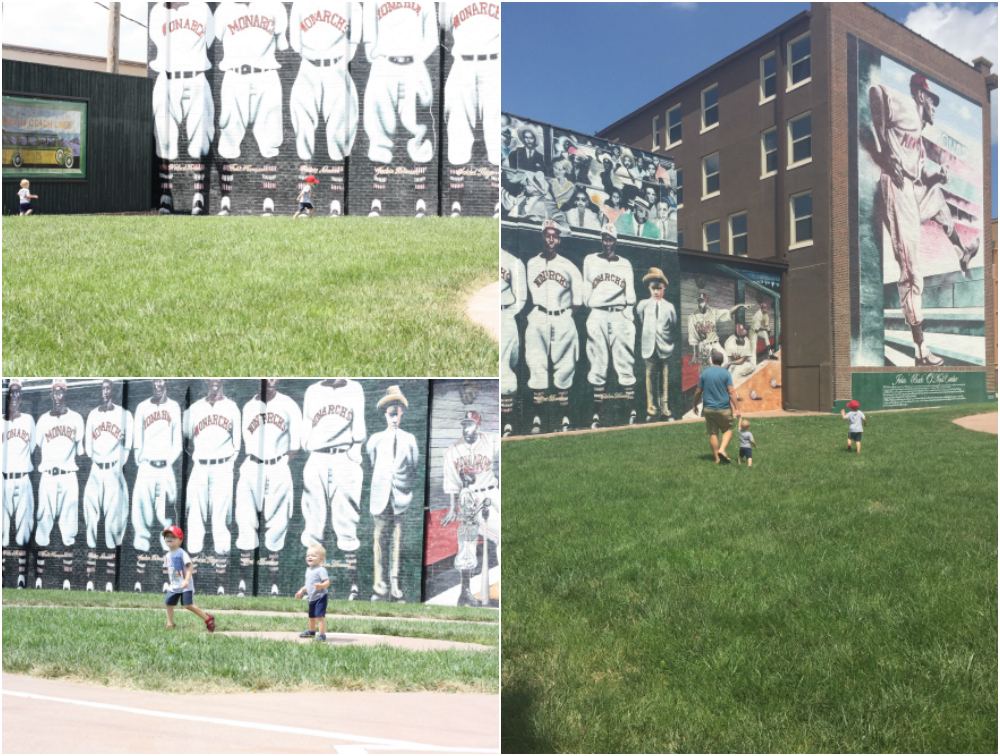 At this point we knew it wasn’t worth trying to check in to our hotel and get a nap, so we decided to explore the city a little bit by car and found the BEST WALL EVER. Again, this is me trying to channel Desiree (she has the best wall shots!). 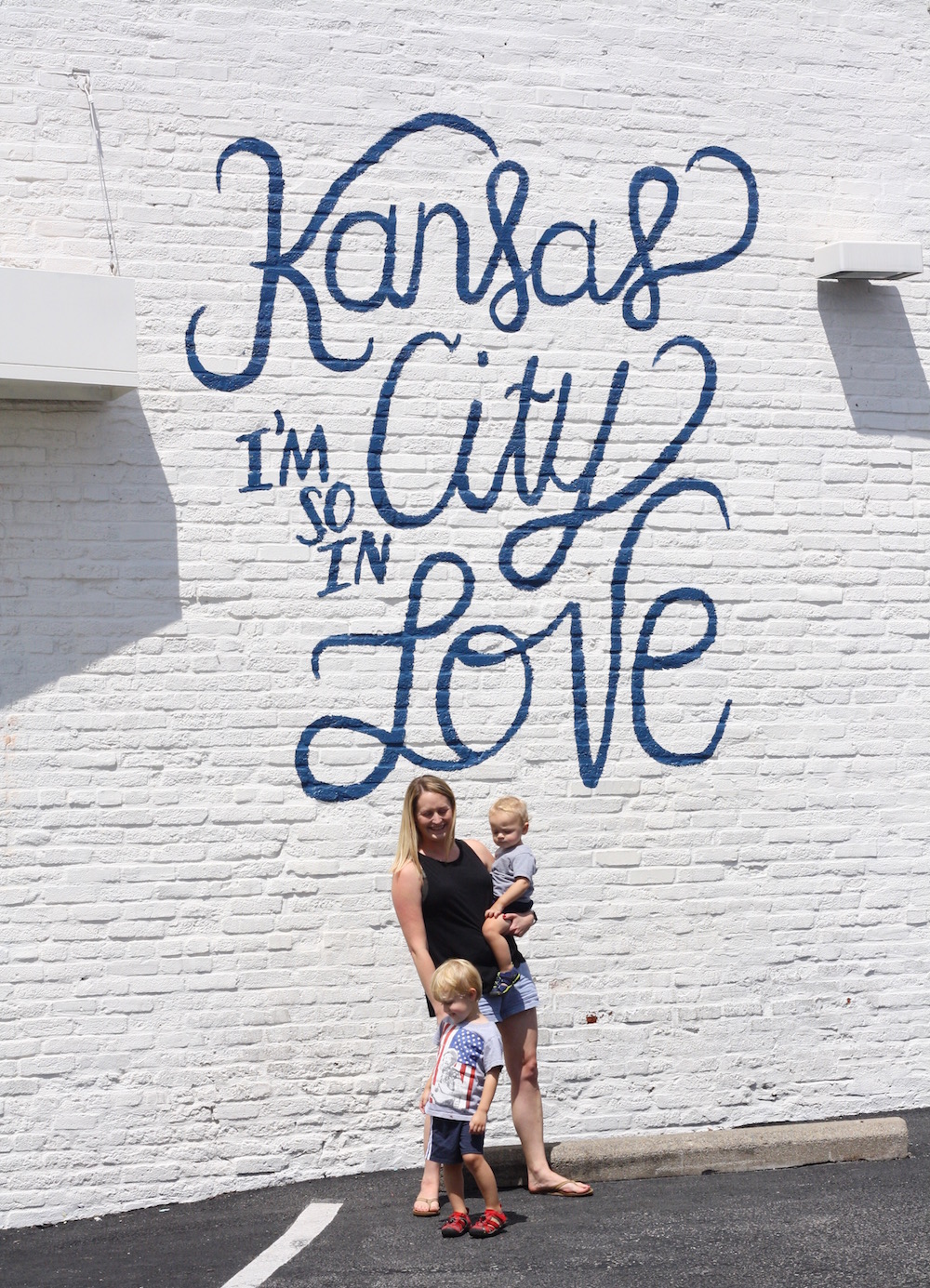 The city was so family friendly and easy to drive and park everywhere! We scouted out some of our adventures for the next day and then headed over to Boulevard Brewing to sit back and relax before heading to the hotel. 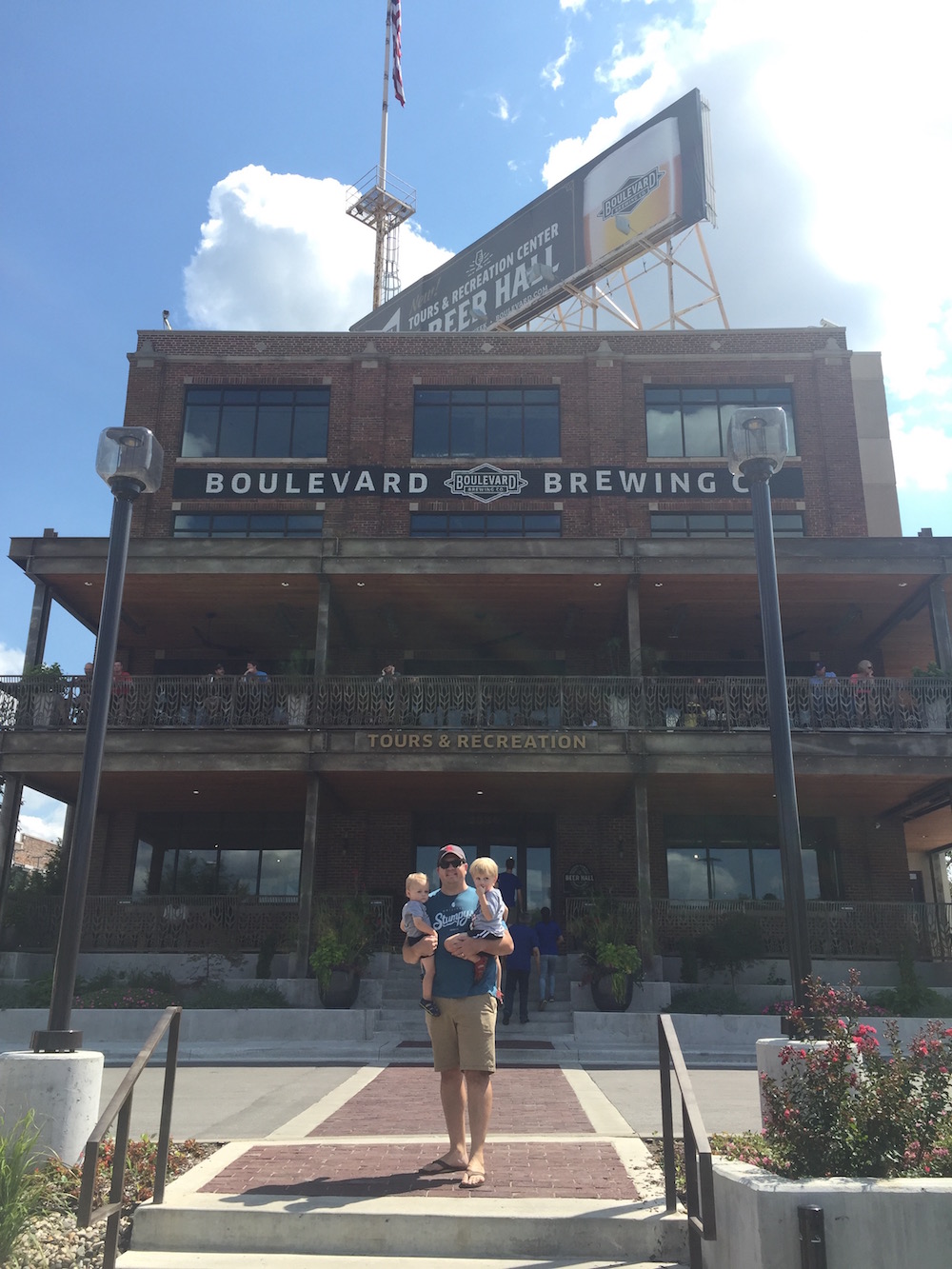 We loved Boulevard and you could tell its strong connection to the city and Royals! Also if you ever run into BTR ask him about what happened in the gift shop. Let’s just say toddlers (ahem, Ezra) can be a little wild.

It was getting later in the afternoon and time to head to our hotel. We wanted to grab a quick bite to eat, so we found a hidden gem of a BBQ place in LC’s BBQ. It was exactly what we needed! We ordered some fries for the boys and BTR and I split a huge burnt end sandwich. 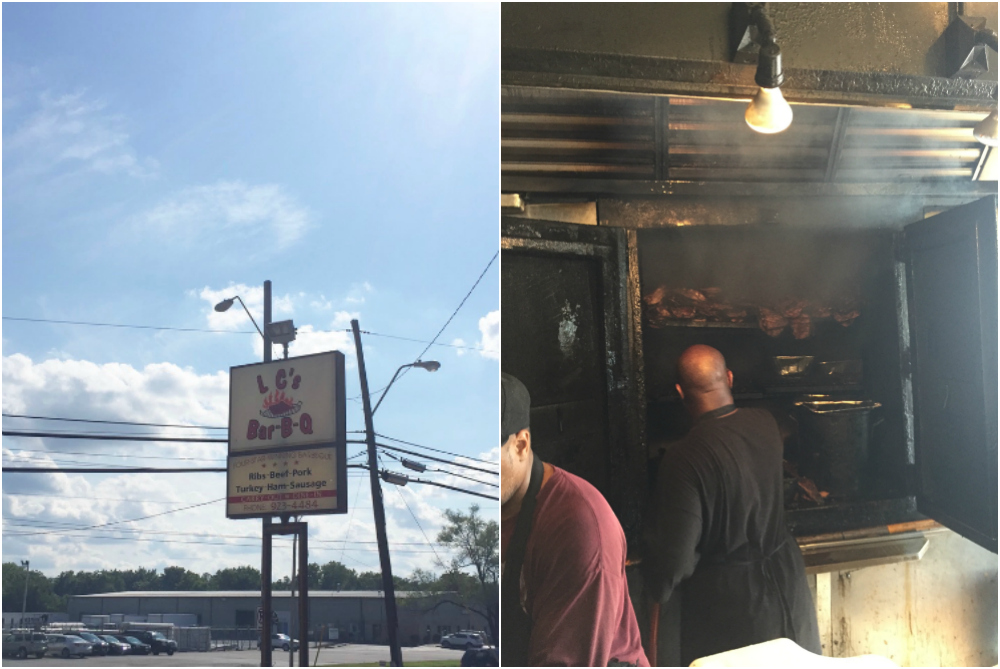 Our hotel was right across the street from the stadium which worked out perfect for us with the boys! Kauffman Stadium is in a big sports complex and shares a parking lot with Arrowhead Stadium (where the Kansas City Chiefs play football). We checked in quickly, got changed into our Cardinal Red, and headed to the game! We have learned the less free time in a hotel room the better because Ezra is a magnet for everything breakable and electric. AKA I turn into a stress ball trying to get ready while also trying to contain him. 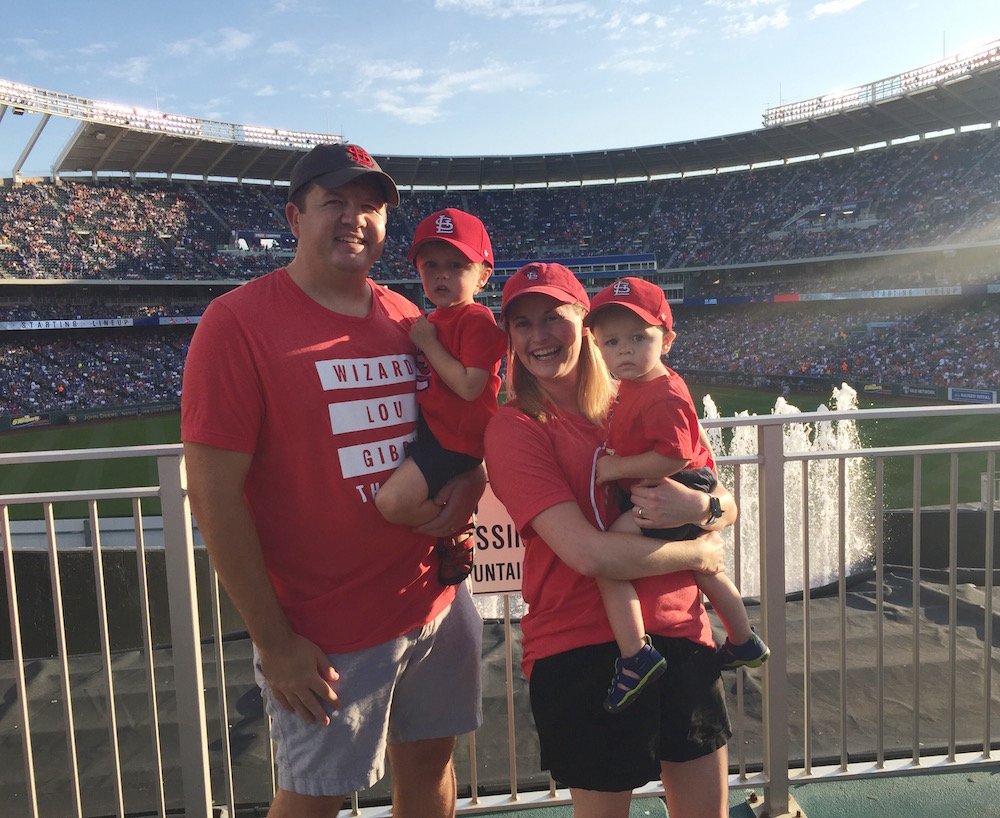 We arrived a little before game time so we could explore the stadium. As soon as we walked in we loved the K. It was so family friendly, open, had great fans, and was a beautiful field. 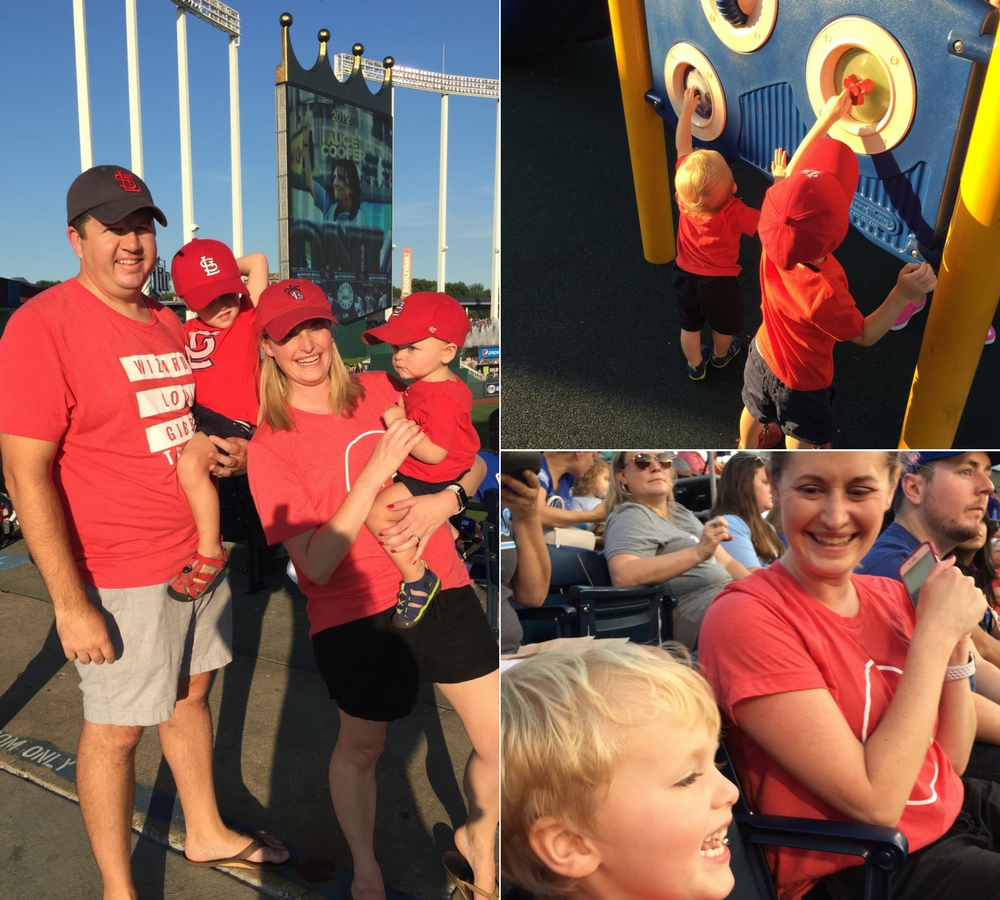 The boys, yes all three of them, were in awe of seeing the field and the Cardinals warming up. After the walk to the stadium and being in the car all day, we headed out to the kid’s area in the outfield to burn off some steam. I have to admit I am very envious of all my KC friends and the K’s kid area. It’s amazing. 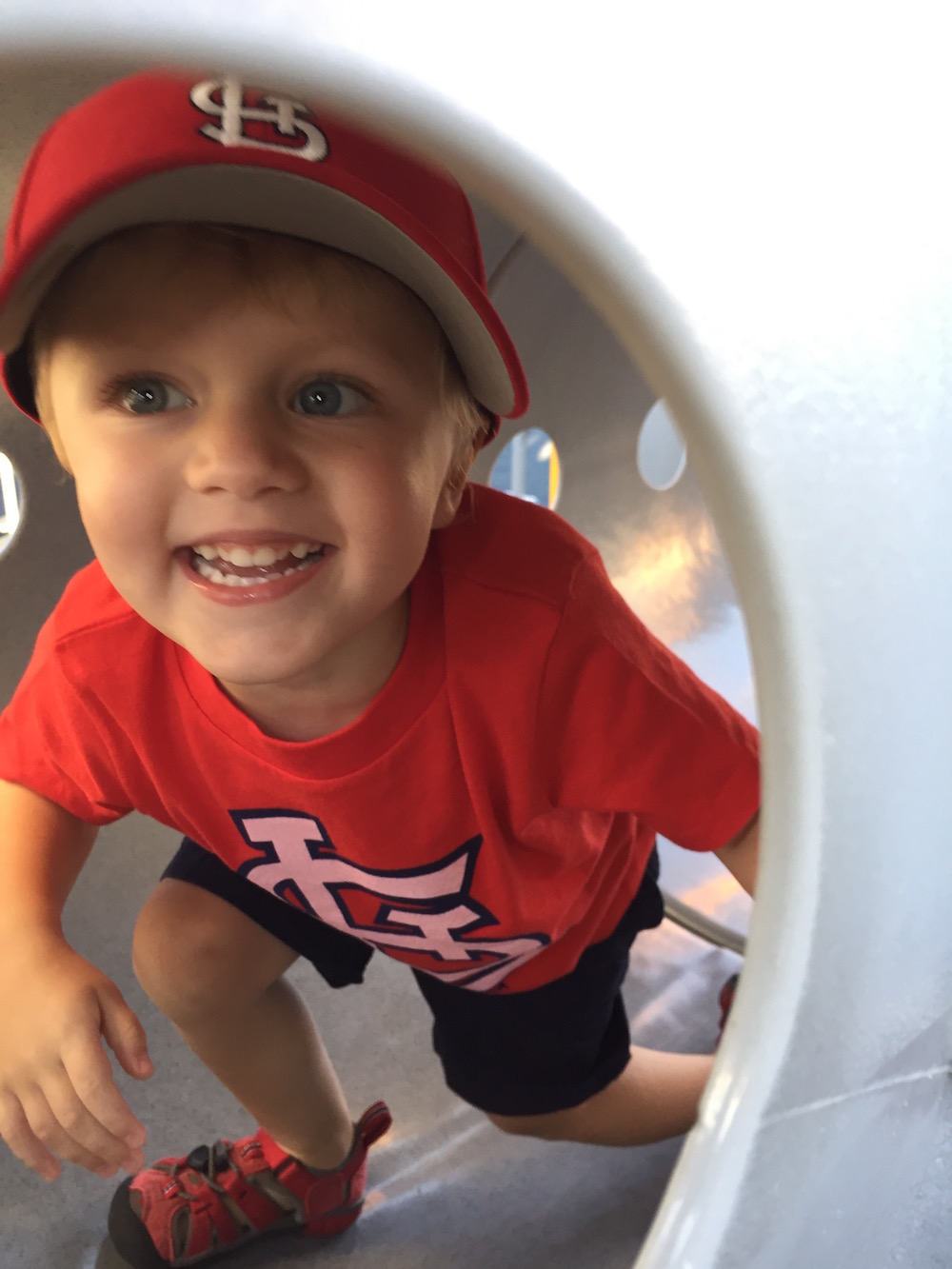 There is a huge jungle gym, putt-putt course, mini K for batting practice, a carousel, and like a million other cool things to do. Jude saw the carousel and was legit pumped but we told him he had to wait till it was dark.

We grabbed a couple local brews and headed to our seats! We had awesome seats to catch the Cardinal’s burst of runs! Ezra is at the age where it is quite difficult (aka impossible) to keep still unless he is strapped in. So within ONE inning, he had dumped an entire water bottle all over him and Brandon, kicked the man in front of us approximately 38 times and had a wrestling match jumping between me and BTR. He did love clapping with everyone else and it was pretty awesome to see him point at the players. Jude was loving watching the game and yelling Go Cards! I’m sure everyone around us loved us. 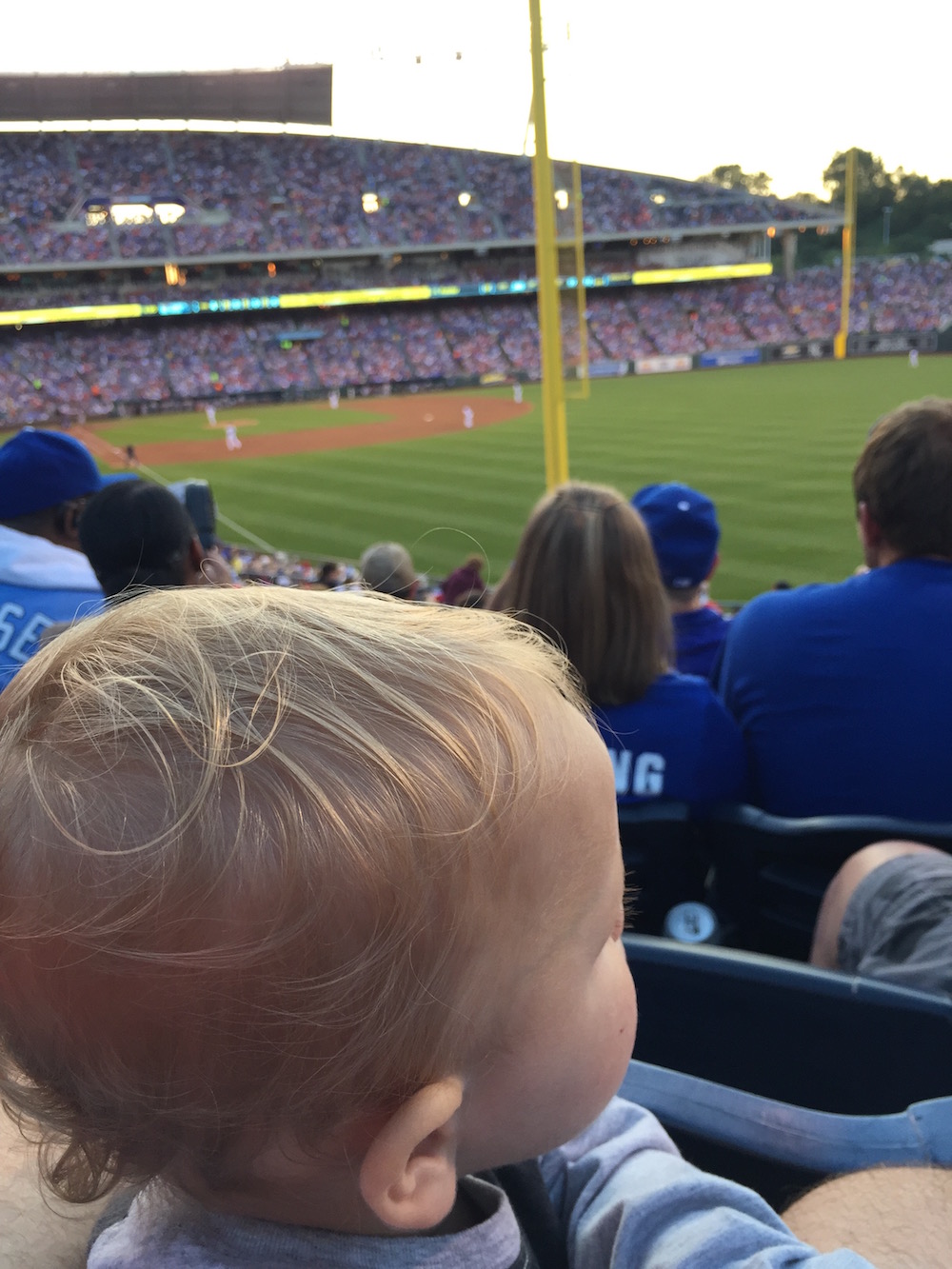 We decided to explore the stadium some more. There were tons of awesome food and drink options. We headed upstairs to the Craft and Draft section to grab a drink and got some popcorn for the boys to share! 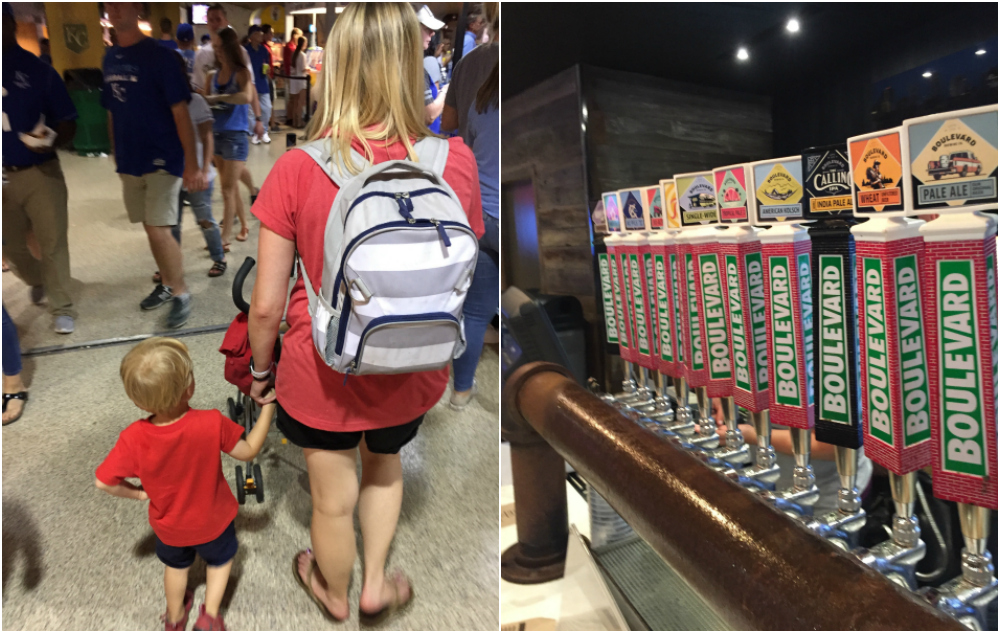 After walking around a bit more and exploring (they even have a Royals Hall of Fame in the stadium that you can visit!), Jude promptly reminded us it was now dark and time to ride the carousel! 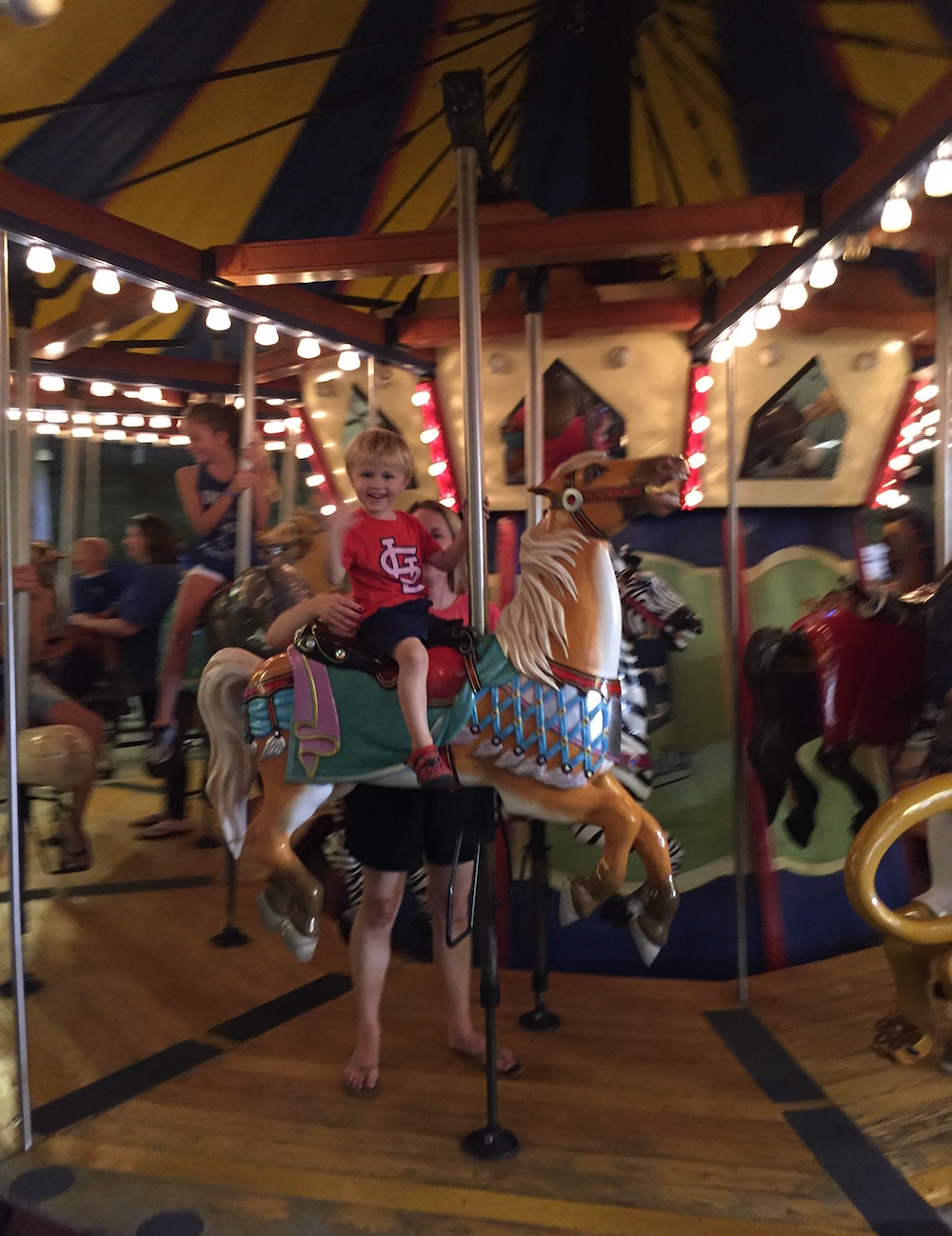 I was able to get on it with him and he loved it! E was tuckered out at this point and enjoyed watching with BTR. Also, bringing an umbrella stroller to the game was the best idea ever! Both boys took turns riding in it.

We decided to sit on the bleachers in the kid’s area and watch the end of the game and cheer the Cardinals on to Victory!

The walk back was much easier after the exciting game. Luckily the boys were super tired after our busy day and ready to go right to bed when we got back to the hotel. Which was great because we had another big day planned on Wednesday!

Our family had the best time and this trip was the perfect send off to summer. We are so grateful for Phillips 66 for sending us down rivalry road to watch the boys of summer.

Road trips, baseball, and late nights are all essentials of summer fun.  We can’t wait to get back to KC to visit a little more, and maybe take a few more games from the Royals :) 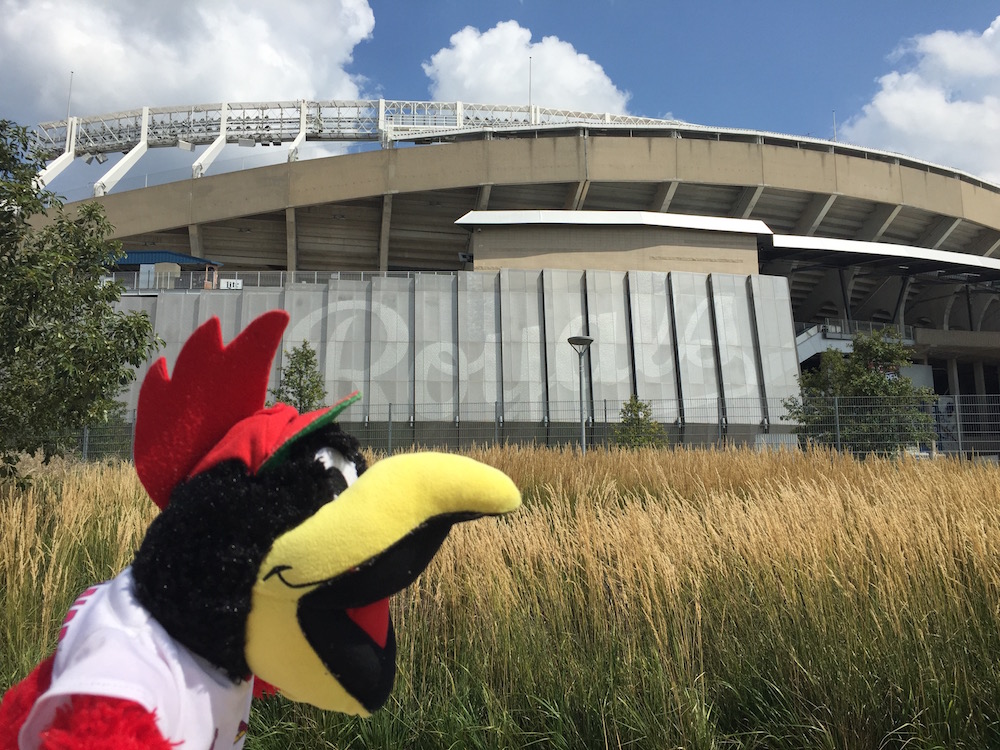 No one represents #STL better than @seriessixcompa